If You Thought ‘Cry Pretty’ Was A Tearjerker, Wait Until You Hear Carrie Underwood’s New Song

By Miranda Raye on August 31, 2018
Advertisement 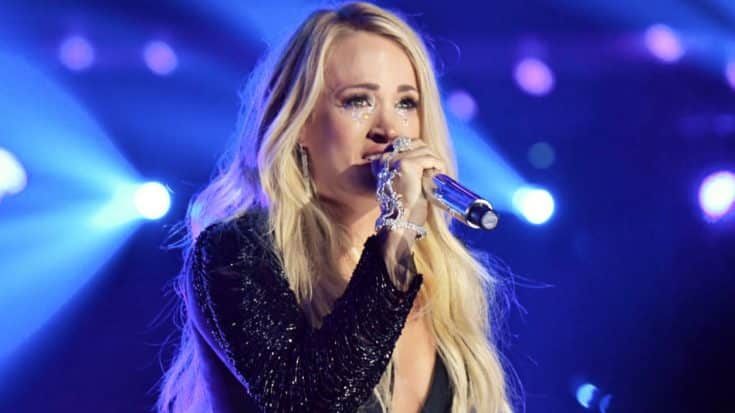 In April, Carrie Underwood offered fans a first taste of her upcoming album when she released her current single, “Cry Pretty.” The empowering track was co-written by Underwood, and has her singing about how sometimes, no matter how hard you try, you just can’t control your emotions and keep things “pretty.”

It struck an emotional chord with listeners, and is one of the biggest hits in country music at the moment. Its music video was equally well-received, and generated a CMA Award nomination for Music Video of the Year.

Following the release of “Cry Pretty,” Underwood revealed that it was the first single off of her upcoming album, also titled Cry Pretty. Due for release on September 14, it has arguably been one of the most anticipated country records of 2018.

On August 19th, Underwood finally revealed the other tracks that make up Cry Pretty. She hosted a listening party for radio and media personnel the following day, which created a great deal of buzz over the album.

One attendee named Sam Alex called special attention to the tenth track “Love Wins,” which he said “should be the theme song to the next James Bond film.”

Now, you can finally understand what Alex meant by that, because “Love Wins” is here for y’all to hear.

There was some suspicion that the track would be Underwood’s next release off of the album after she spoke to various media outlets about it specifically. Saying she wanted to write a song that could create a sense of unity, Underwood described “Love Wins” as such:

“We weren’t trying to speak negatively about our world, because we live in an amazing world, but I feel like we get really caught up in surface things and I feel like in this world, we’re quick to get angry at each other. I personally think that we’re all different for a reason. I feel like if you just sit down and talk to somebody who’s not like you and keep it calm, we can all learn from each other.”

Overall, the main thing Underwood wants people to get out of “Love Wins” is a sense of hope. “Above all, we want people to feel hopeful,” she said. “I want to make sure people see this for what it is and what we’re trying to say.”

The lyric video for “Love Wins” was released on Thursday (August 30), giving fans the chance to hear Underwood’s message of hope for the first time. If you thought that “Cry Pretty” was a tearjerker, just wait until you hear this, because it somehow manages to pack an even stronger emotional punch.

We could go on to describe the beauty of the song, but it’s something that’s best for you to witness on your own. Go ahead and listen to Underwood’s new song “Love Wins” in the clip below. But be warned, you may want to grab a few tissues before you do.