By Jennifer Pernicano on January 17, 2020
Advertisement 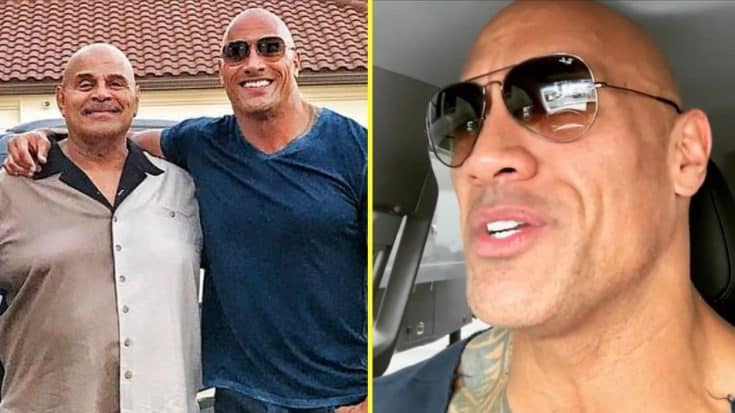 On January 15, WWE Hall of Fame wrestler Rocky Johnson passed away. WWE confirmed the passing with an article detailing his legendary career.

He began wrestling with the National Wrestling Alliance in the mid-60s and worked his way up to the WWE in 1983, where he teamed up with Tony Atlas as “The Soul Patrol.” Tony and Rocky became the first African-American World Tag Team Champions in WWE history in 1983.

We changed wrestling by paving a new path,knocking down doors while showing what movin' n groovin' is all about!It takes two and I never would've done it without you. It showed me alot while learning more . I pray for @TheRock and his family ,I'm so sorry for your loss. pic.twitter.com/r5g9YMi3S3

Know as “The Soul Man,” Rocky retired from wrestling in 1991 and began training his son, Dwayne “The Rock” Johnson, who has since become one of the most successful names to come out of professional wrestling. He is now the highest paid movie star in the world.

Rocky was inducted into the WWE Hall of Fame in 2008 by none other than his son, which made the moment all the more special. The two men shared quite a bond, something Dwayne often shared on social media.

Happy Father’s Day to this hardly ever smiling OG bad ass. Little boys by nature, look up to and idolize their old man. They want to be just like em, do whatever they do and are always looking for their approval. Funny thing is the day I stopped looking for that approval was the day I understood what it meant to be man and more importantly, a father. That shift lifted me to a new level of gratitude for the tough love he always gave. Years later as a man and father of three girls, I know that tough love, is a helluva lot better than no love at all. I’ll take it. It’s made me who I am today. Grateful to the original Rock. #HappyFathersDay #KingStache #RockyJohnson

At the time his passing was announced, a cause of death was unknown, but now that Dwayne has broken his silence, we now know that it was sudden and unexpected.

Dwayne shared a vintage video of Rocky being introduced during a fight. The camera then cut to a certain spectator in the crowd, his young son Dwayne. In the caption, Dwayne wrote an emotional note to his father, who he says was ” ripped away from me so fast without warning. Gone in an instant and no coming back.”

He ended the note by saying, “I want you to rest your trailblazing soul, Soulman.
Pain free, regret free, satisfied and at ease.
You lived a very full, very hard, barrier breaking life and left it all in the ring.
I love you dad and I’ll always be your proud and grateful son.
Go rest high.”

See Dwayne’s tribute to his father below.

I love you. You broke color barriers, became a ring legend and trail blazed your way thru this world. I was the boy sitting in the seats, watching and adoring you, my hero from afar. The boy you raised to always be proud of our cultures and proud of who and what I am. The boy you raised with the toughest of love. The intense work. The hard hand. The adoring boy who wanted to know only your best qualities. Who then grew to become a man realizing you had other deep complex sides that needed to be held and understood. Son to father. Man to man. That’s when my adoration turned to respect. And my empathy turned to gratitude. Grateful that you gave me life. Grateful you gave me life’s invaluable lessons. Dad, I wish I had one more shot to tell you, I love you, before you crossed over to the other side. But you were ripped away from me so fast without warning. Gone in an instant and no coming back. Im in pain. But we both know it’s just pain and it’ll pass. Now I’ll carry your mana and work ethic with me, as it’s time to move on because I have my family to feed and work to accomplish. Finally, I want you to rest your trailblazing soul, Soulman. Pain free, regret free, satisfied and at ease. You lived a very full, very hard, barrier breaking life and left it all in the ring. I love you dad and I’ll always be your proud and grateful son. Go rest high. #ripsoulman #rockyjohnson ?

And watch him explain a sweet story about his dad in the video below.

Great chat with my old man. Felt good to my cold ? to hear him express his love. He’s a weathered soul and like all weathered souls, there’s often a harsh storied path that got them there. Well for my pops that path started at 13yrs old when his mom kicked him out of his house on Christmas day and forced him to live on the streets (very true and fucked up story) so his reality of compassion and love was forged thru pain and toughness. He raised me with that tough physical love and used to beat my ass in the gyms and on wrestling mats. I hated it then as a little boy, but grateful for it today as a man. It’s shaped my DNA and helped inform how I raise my own babies (minus the ass kickings;) but always instilling the value of hard work and discipline. For that I’m grateful and this one felt good. Crazy how full circle life can come. Enjoy your new house pop – what a storied path and thanks for the ass kickings ???? #weathered