“I’m Not On Drugs,” Lady Says After She Spots Zebras In Her Yard 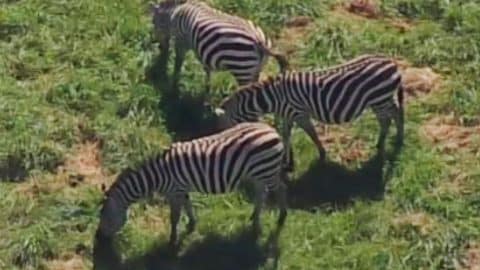 According to Chief Rodney Taylor of Prince George’s County Animal Control, there are at least six zebras on the loose in a Maryland neighborhood and one resident recorded them from their backyard.

The video shows three zebras passing by the resident’s home along Croom Road in Upper Marlboro, Maryland on Aug. 31 before the locals called and reported it to the authorities.

According to People, Layla Curling said, “I thought it was a deer for a second, and then I saw it was a zebra — a whole zebra right next to our playground right next to the fence. So, I ran upstairs to get a better look up there, and then I said, ‘Mom, there’s, like, a zebra outside our playground,’ and she didn’t believe me and said I was crazy.”

Her mother Alexis Reed Curling said after taking a look, she too confirmed seeing the zebras and picked up the phone to alert the authorities.

She told the dispatcher, “‘Ma’am, I am not drinking. I have not had any drugs. I have zebras in my backyard walking on the train tracks. I just wanted to know what service could come out because I didn’t want them to get hit, and she paused for a long time and then said, ‘OK, here’s the number.'”

Layla’s father Paul Curling shared the video of the zebras with FOX 5 DC and gave his thoughts on the event.

“One of my first thoughts was, ‘Well, maybe somebody had a birthday party, and they painted some horses for some four-year-olds or something because there’s no way in the world some zebras could be here in upper Marlboro just roaming around like deers,'” he said.

Officials say that the zebras escaped from a nearby farm last week and have been on the loose for several days. Authorities spotted them by helicopter on Tuesday while grazing before they ran off only to be lost again.

Wildlife officers said the animals were last spotted gathered in a field and they have placed a feeding station in the area where they hope they will be able to corral the animals.