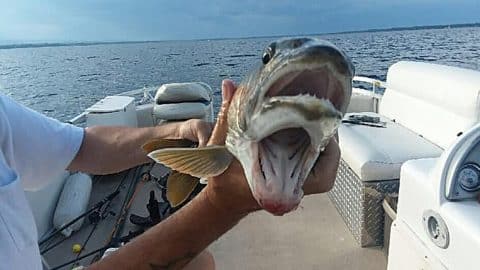 Angler Debbie Geddes was out fishing on Lake Champlain with her husband when she reeled in a rare fish that’s got the internet buzzing, a lake trout with two mouths!

“When this particular fish bit, it felt like I had a nice fish on,” Debbie said. “I actually commented, ‘I hope it’s as big as it feels!’ When we got it in the boat I couldn’t believe what I was seeing! Two mouths! And yet this fish was healthy and thriving! Pretty amazing!”

Debbie and her husband were so impressed at the fish wondering how it got to be like this that she took a picture and her co-worker Adam Facteau uploaded it to Facebook. It literally went viral within a matter of days, getting over 5 thousand shares.

“I just can’t believe all the attention this has received,” Debbie said. “The public’s responses/theories are quite interesting, to say the least. I personally believe it was caused by a previous injury, most likely from another angler.”

How Did It Get Two Mouths

“Well, I think everyone has an opinion, which makes it interesting for discussion,” Debbie’s co-worker Adam said of the theories. “However, Lake Champlain is also known for being a sewage dumping ground from Canada and (Vermont). Plus, many of these fish are stocked.”

Whether it’s a previously injured fish or a fish that morphed due to pollution it appears to be thriving perfectly fine on its own in the lake.