By Manly Bryant on December 27, 2018
Advertisement 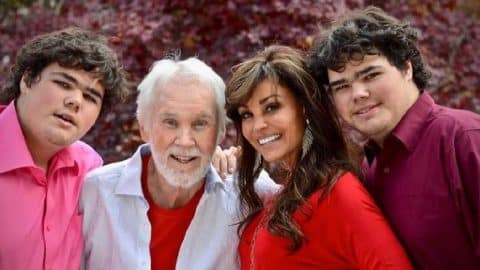 Kenny Rogers and his wife, Wanda, were together for 22 years and counting when he passed away at the age of 81 on March 20, 2020. The unbreakable duo had a love story that proved nothing can get in the way of fate. From their unexpected introduction to their beautiful family, the couple built their life together day by day. The country icon took a “gamble” and landed on a once-in-a-lifetime love.

#ThrowbackThursday with my better half!

Kenny and Wanda met while she was hosting at a restaurant in Atlanta. One night, Kenny came in for dinner with plans to meet his blind date. Instead, he left with a different girl taking his heart. He later called the restaurant and asked about Wanda. At first, Wanda didn’t believe her co-workers, feeling like they were playing a joke on her. After a good amount of persuasion, her co-workers convinced her to return the country singer’s call. The rest is history.

I remember this moment like it was yesterday. So grateful for every day with you, Wanda, My Valentine!

Kenny and Wanda married on June 1st, 1997, at Kenny’s ranch in Georgia. In the summer of 2004, the couple welcomed two twin baby boys. While Kenny was now a father of five, he couldn’t be happier. Jordan and Justin are identical twins with curly brown locks similar to their mother’s.

Since their birth, Kenny brought the twins on tour with him for a couple of shows; even letting the boys sing on stage.

While Kenny loves to show off his boys, it had been a while since we had seen them all grown up. For 2018’s Christmas photos, we got to see just how much the twins were growing into mini versions of their dad. Here are a few photos as they’ve grown over the years.

With my boys! #TBT

Proud to be a Dad!
Happy Father's Day! pic.twitter.com/ESc0dPS8gj

One of the most rewarding things in my life is to be a father. Thankful for the privilege! Happy Father's Day Weekend to all fathers.

Now, the boys are in their teenage years still with the same brown locks as Wanda and smiles just like Kenny’s.

Merry Christmas from me and my family to you and yours!

Hope everyone had an amazing Christmas! Peace and joy to all!