By Miranda Raye on September 17, 2019
Advertisement 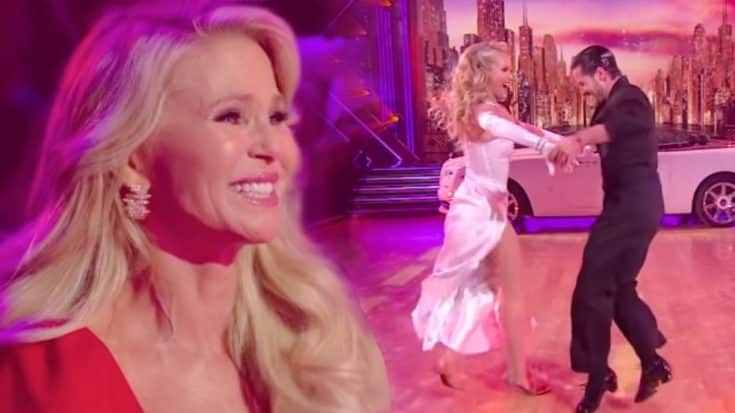 Like the other contestants who signed on to compete on the new season of Dancing with the Stars, model Christie Brinkley was looking forward to her first dance. She had been rehearsing for weeks, with her chosen song, the type of dance, and even the name of her professional partner kept completely secret.

Fans speculated that she’d dance to “Uptown Girl” by Billy Joel, since she appeared in the song’s official music video.

It turns out that was Christie’s plan, but she unfortunately didn’t get to see it through.

On Monday (September 16), Christie revealed that she would no longer be able to compete on DWTS. She said that during rehearsals just days before the season’s first show, she fell and broke her wrist.

“So here’s the news. I just broke my arm into a 1000 pieces requiring surgery with a metal plate and screws to hold my arm together,” Christie wrote on Instagram.

With hardly any time left until the season’s debut episode, DWTS was rushed to find a replacement. But they didn’t have to look far, because Christie’s 21-year-old daughter Sailor Brinkley-Cook agreed to fill in for her.

Sailor Breezes In to Save the Day! Hey My Friends! So here’s the news. I just broke my arm into a 1000 pieces requiring surgery with a metal plate and screws to hold my arm together..Im so sorry if I’ve disappointed anybody! Only something as bad as this could stop me from continuing to dance with my wonderful coach for @dancingabc …I was having a blast!!!! Shattering my arm was quite literally a crushing disappointment, i never ever want to let anyone down…so I looked for a silver lining and i think I found one that is is solid gold! Sailor! But first I would have to convince Sailor to replace me..she was already on the plane to come sit in the audience when I reached her! (Alexa has commitments in NY including her upcoming Cabaret Show at the @cafecarlyle ) I also had to convince my student/ @imgmodels Sailor to overcome serious stage fright to replace me on the show! Sailor always meets her challenges head on and realized she did not want to be defined by her fears so with just hours to learn my routine she is turning my defeat or should i say two left feat into her own victory of courage! So Ladies and Gents I give you my beautiful Sunflower Sailor Lee. And i think you are all going to have a blast together on this season of @dancingabc ! Sorry for the typos it’s my right arm! And Sailor Thank you for taking a very disappointing turn of events into something very special! you know Showbiz is all about getting a break and I guess you can say Sailor and I both got one on this season of @dancingabc #family #familyfirst #challenge #doitforlove #fearless #brave #dare #justtry #silverlining #dauntless #dance #lemonaid #gowiththeflow #carpediem #seizetheday #formom #TeamSailaV #c’est la vie! #teambrinkley

Unlike the other celebrities, who had weeks to prepare their debut routines, Sailor only had a few days to perfect her moves to her “Uptown Girl” dance.

There was surely a lot of pressure resting on the young model as she hit the stage on Monday night. It was then revealed that she would be dancing the foxtrot, and that her partner was two-time champion Val Chmerkovskiy.

Even though she is now in a cast, her mom was watching from the audience, and was even incorporated into the routine. Since she was seated next to the stage, Sailor walked over to her at the start of the dance and handed her a pair of sunglasses she used as a prop.

After Sailor’s performance, Christie expressed how “proud” she was of her daughter.

As you watch Sailor dance in the video below, you’ll also be amazed to see how well she did after having just a few days to rehearse.

The judges were equally impressed, and rewarded her with a combined score of 18 points. That was the fourth best score of the night!

Judge Len Goodman even said that the routine “floated his boat.” We think it’s safe to say that Sailor nailed her DWTS debut!