Inside The World’s Largest Snow Maze 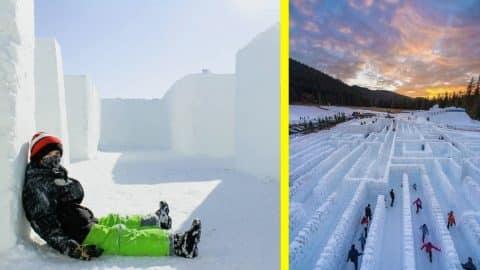 The snow maze is located just outside of Winnipeg, Canada and currently holds the Guinness World Record for the largest snow maze on the planet.

This year, due to the pandemic, they’ve decided to increase the size of last year’s snow maze to assist with social distancing. It’s now an impressive 240,000 square feet, which is twice the size it was the year before. Clint Masse, the co-owner of the maze said it’s now 91% bigger.

“We love outdoor entertainment, it kind of just fell into place, we run the corn maze, of course, in the summer and then the Sunflower Expo as well during that time. As we get to fall, we have the haunted forest, and then we’re like, we need to do something in the winter time. Now we’re into snow mazing,” co-owner Angie Masse told Inside Edition.

It features five themed rooms made of snow and the paths are eight-foot-wide so there’s more room for folks to get around and pass each other while keeping a safe distance.

The walls are made out of massive ice bricks cut out of the river on Clint’s family property and when put together, the maze walls stand about eight feet high. He says not to worry though, because there are “easy exits” strategically placed throughout the maze for folks in case of an emergency.

It cost $15 per adult and $13 per child and children age 4-12 get in free. It will be open every day and until March 14th as long as the weather is permitting. Click below to see footage of the maze.