Introducing Blosom, The Tallest Cow On The Planet – Stands At 6 Feet 2 Inches Tall 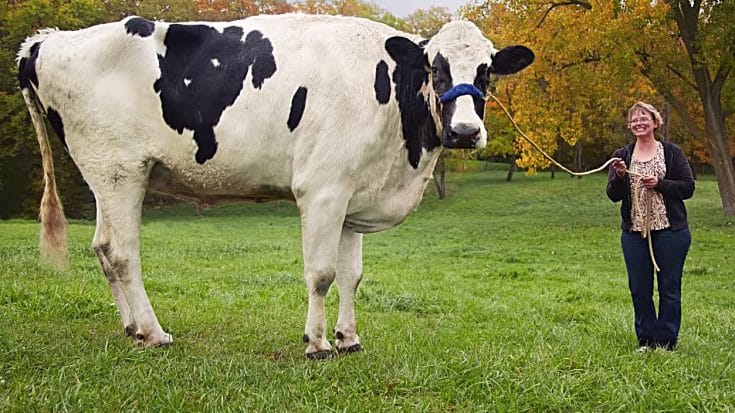 Witness this gigantic cow named Blosom towering over her owner, Patty Meads-Hanson, who became the Guinness World Record holder for “tallest cow ever” in 2014.

She’s a female Holstein cow which is the type of cow best known for the world’s highest production dairy animal. However, for Blosom, she created her own claim to fame by growing beyond what most people thought was possible.

Most Holstein cows grow up to 58–65 inches tall from hoof to shoulder but Blosom stands a colossal 74.8 inches tall. So tall in fact her veterinarian had to use a step latter to check her.

“The funny thing about Blosom was how unaffected she was by all the attention that seemed to surround her. As long as she had her oats, daily chin rubs and ear scratches, life was good,” owner Patty Meads-Hanson said to Guinness World Records.

Unfortunately, Blosom passed away on May 26th 2015 due to getting an irreparable leg injury a year after she won the world record. Nevertheless, she still holds the record today.

Watching her grow up so massive it was originally Patty’s father who suggested Blosom get measured by the Guinness World Records. Sadly, he passed away as well before she officially became the record holder.

However, after confirming she was definitely the tallest cow ever Guinness sent a film crew out to the farm and filmed the video you’re about to see below.