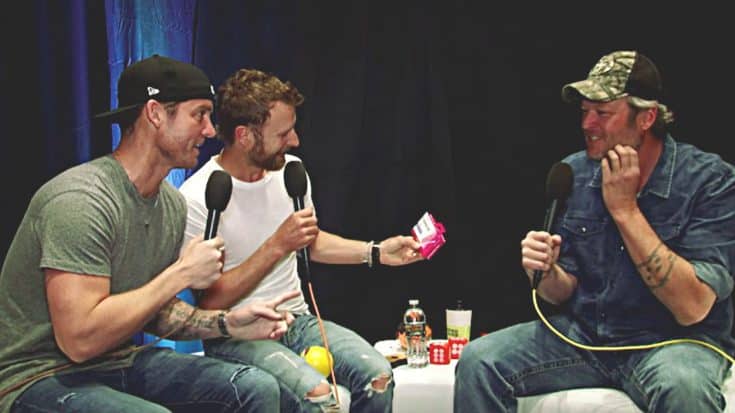 Ever since Blake Shelton and Gwen Stefani started dating, the couple has been bombarded with the same questions over and over: When will you two have kids? Do you want to have a baby? Are you expecting?

Shelton and Stefani always act coy about their plans to have children together some day. But for now, they seem content to spend quality time with Stefani’s three sons, Kingston, Zuma, and Apollo.

However, the two have never said that they don’t want to have children together. So, there’s always a possibility that they could welcome a little one some time in the future.

Since they get asked about pregnancy plans all the time, Shelton and Stefani have developed a good sense of humor around the whole thing. During a show in Oklahoma, Shelton welcomed his lady love to the stage by saying “she actually just gave birth to twins yesterday.”

Keeping the humor train rolling, Shelton met up with Dierks Bentley and Brett Young to find out if a baby really is in his future. The three country stars sat down with a Magic 8-Ball and a pregnancy test to find out if the three of them will be having children soon.

As you would expect, hilarity ensued.

Out of the three artists, Bentley is the only one who has kids. Shelton has none, and neither does Young, who recently got engaged.

Young asked the Magic 8-Ball off-camera if a baby was in his future, and was told that he would have one later this year. He pointed out that was a scary thought, since it was mid-April at the time they played this game.

As for Bentley, he got the response to try again. “He’s okay with the trying part,” Young joked.

Shelton was the only one whose result they revealed on-camera. We’re sure all of the guys were eager to see what the Magic 8-Ball would tell him, considering all of the pregnancy fever surrounding him and Stefani.

What The Ball Had To Say About Blake…

Young gave the Magic 8-Ball a shake and turned it over to reveal the answer. “Sorry, not now,” he read.

Surely, fans of Shelton and Stefani were upset to hear this result, even if it was just something read off of a Magic 8-Ball. But Shelton wasn’t so sure how he felt about the news.

“Should I be sad or high-fiving?” he asked jokingly.

Well, if the Magic 8-Ball is right, it looks like it will still be a little while before Shelton and Stefani have any children together. You can watch the hilarious moment he learned that news by watching him play the pregnancy Magic 8-Ball game with Bentley and Young below!