By Manly Bryant on November 24, 2021
Advertisement 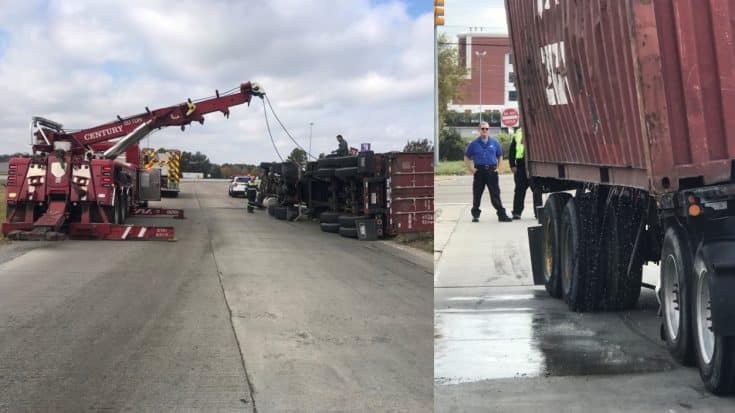 According to the Murfreesboro Police Department in Tennessee, a massive semi-truck carrying 400 thousand dollars worth of Jack Daniel’s Whiskey overturned on the highway and ruined the load.

The semi was riding down S. Church St on November 17th and taking a left turn onto the I-24 on-ramp at around 9:30am when the accident happened. When the police department arrived on the scene they took several photos of the tipped-over truck and trailer.

Many people there assumed the Jack Daniel’s was smashed inside but there wasn’t evidence of this until a wrecker got there and flipped the vehicle back up on its wheels.

At this point, it was apparent that many bottles inside the trailer had been broken and were now spilling onto the street. Fortunately, the driver wasn’t injured.

The truck had reportedly picked up its shipment from Lynchburg and was heading to Nashville to the railroad terminal to get shipped across the sea to Isreal.

Here’s the official statement from the Murfreesboro Police Department in Tennessee: “A semi loaded with $400K worth of Jack Daniel’s Whiskey overturned after the load shifted as the driver was making a left turn onto the I-24 on-ramp from S. Church St around 9:30 a.m. Wed. Nov. 17. Several gallons spilled onto the ground as the truck was up righted by a wrecker. The driver was not injured. The load of whiskey was picked up in Lynchburg and was heading to Nashville to the railroad terminal to be shipped to Israel.”

More On The Incident In The Video Below