By Manly Bryant on October 13, 2020
Advertisement 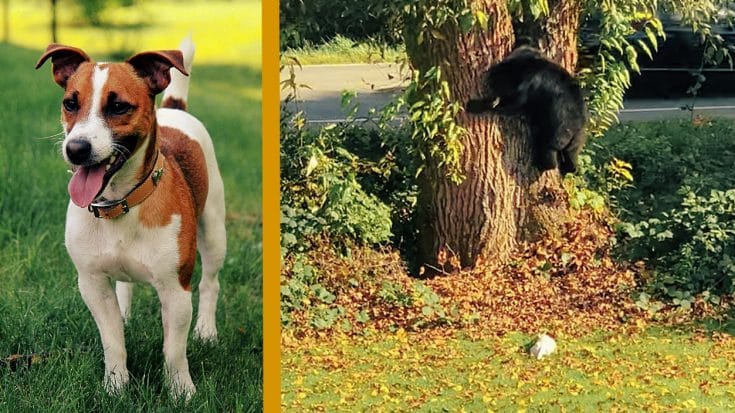 On October 12th, 2020, YouTube channel Storyful Rights Management shared a video of a brave puppy protecting his home and loved ones from a black bear that had wandered onto his property.

Property owner, David Jonsson, uploaded the video to Storyful and they shared it to their YouTube channel. It appears in the video just his wife, another lady, and his kids were home during the time that the incident took place.

One of the adults picked up their phone and started recording the scenario in Port Coquitlam, British Columbia. The video starts off with the camera pointed towards Jersey, a small, 10-inch-tall, Jack Russell that was sitting at the foot of a tree in the front yard waiting for a black bear to climb down.

The bear had apparently climbed up the tree and when it got spotted, it decided to climb back down to make an escape. As the bear was making its way down the tree, it stops about two feet from the ground due to Jersey standing there vigilantly waiting for it to touch the ground.

You can tell the bear was a bit intimidated by the pup and having second thoughts about coming down from that tree, but it cautiously makes it way down, carefully planting its paws on the ground. Then, all of a sudden, the Jack Russell’s protection mode kicked in and it goes off on the bear, barking at it and charging towards it.

The kids scream at Jersey from inside the house trying to get him to retreat but the dog doesn’t back down or let down his guard. He keeps the bear trapped against the tree for a minute and a half until eventually, the bear makes a sneaky getaway and takes off running.

Jersey chases the bear and scares it so badly that it slips and slides on the grass just before entering back into a wooded area near the home. Good boy, Jersey! Way to hold down the fort! Go ahead now and watch the full video below!