Jason Aldean Gets Pranked By Reality Star On Live Television 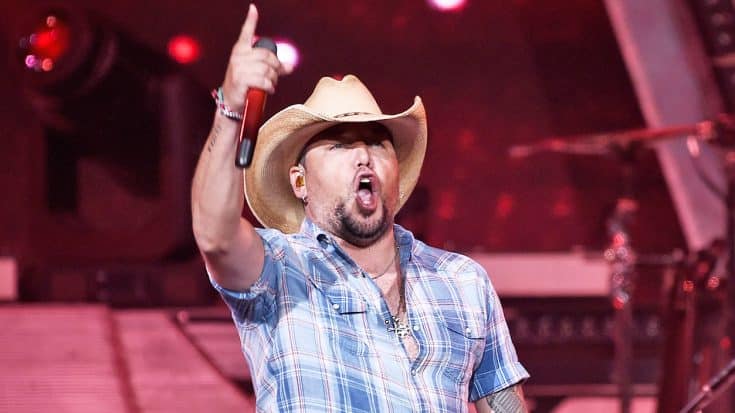 Just a few days after country star Jason Aldean and his wife Brittany revealed that they are expecting their second child together, they made another huge announcement.

The parents to a baby boy named Memphis, who was born on December 1, 2017, revealed on Instagram that they are adding to their family. They each shared a photo of Memphis wearing a onesie that said, “Big Brother” on it.

The newest Aldean baby will not only join Memphis, but also Jason’s daughters Keeley and Kendyl, from his first marriage.

Their other exciting announcement was that they are starting to build their “dream home” in Tennessee. Brittany posted a photo of a dirt road that leads to a piece of land in the middle of a wooded area, where they will all soon call home.

“Looking at the land it’s hard not to envision a place where our babies will run, laugh and play with each other for so many years to come. I can hardly wait to hear those little feet running down the halls,” she wrote.

And so our new journey begins… we’ve decided to build our dream home in Tennessee☁️ Looking at the land it’s hard not to envision a place where our babies will run, laugh and play with each other for so many years to come… I can hardly wait to hear those little feet running down the halls?

Construction is well under way, but when Jason’s good friend, reality star Todd Chrisley, stopped by E! News recently – he thought otherwise, if only for a minute.

E! News hosts Jason Kennedy and Giuliana Rancic convinced Todd to call Jason up and pretend as though there was something wrong with the land he had purchased.

“We got a problem out here on this property that you own,” he said in the clip. “Are you aware that you’ve been clearing property out here where you got some endangered species?”

Jason calmly explained that he had no clue, explaining to Todd’s character “Bill Kennedy” that he and Brittany had purchased the land within the last six months and the previous owner knew what their plan was, so they assumed there was no problem.

“Well, I mean, you understand that we’re gonna have to shut this construction site down,” Todd said in an over-exaggerated Southern accent. “I mean, you know, you’re out here encroaching on an endangered species, you know, a crawfish that’s got two penises. Now, are you aware of that?”

After this line, Jason sort of figured out he was getting his leg pulled by someone he knew. After finally revealing himself, Todd got some harsh words from Jason, who didn’t sound too pleased to being pranked on live TV.

“We’re not friends anymore after this,” he said. “You’d better keep your eyes open!”

Even after this comment, both parties knew this prank was all in good fun, and Todd was surprisingly shocked by the way Jason handled himself when he did think that “county officials” were calling him.

“Gotta love when a good plan comes together , thanks [Jason Kennedy] and  [Giuliana Rancic]  for helping me pull this off, and thanks [Jason Aldean] for being so polite to the ‘county officials’, it’s a side of you I rarely see,” Todd wrote on Instagram.

Gotta love when a good plan comes together , thanks @thejasonkennedy and @giulianarancic for helping me pull this off , and thanks @jasonaldean for being so polite to the “county officials” , it’s a side of you I rarely see …

Watch the prank go down in the video below.