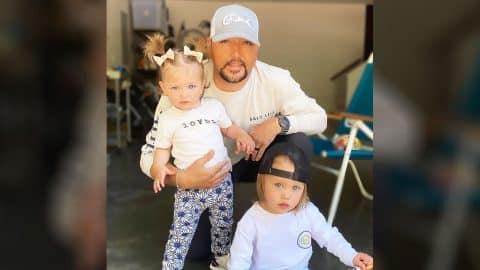 Country megastar Jason Aldean posted what just might be the cutest photo on the Internet right now. The picture is of him with his two youngest children, Memphis and Navy with the caption “Irish Triplets.”

Both children belong to Jason and his wife Brittany, who he married back in March 2015.

Jason’s first boy, Memphis, was born December 1, 2017  and their first daughter together, Navy Rome, was born on February 4, 2019. With such a minimal age difference between Memphis and Navy, along with their hazel eyes matching their daddy, “Irish Triplets” is a fitting caption.

Jason and his wife Brittany have their two children as well as two older daughters, Keeley and Kendyl from Jason’s previous marriage to his high school sweetheart, Jessica Ussery which ended back in 2013.

It’s no secret that Jason loves having his family with him while he’s traveling on the road. His tour bus is even designed for the whole family to fit on!

On March 23rd, Jason officially released a new single called “Got What I Got” which has now been added onto his latest album. The song is a love ballad about how thankful he is for the way his life has turned out and how he has no regrets.

Hear more about my latest single, “Got What I Got”. Listen now on @AppleMusic. https://t.co/MzsYIRbwj5 pic.twitter.com/x7YdX5rX7e

Listen to the video below to enjoy his latest single!