By Manly Bryant on October 17, 2018
Advertisement 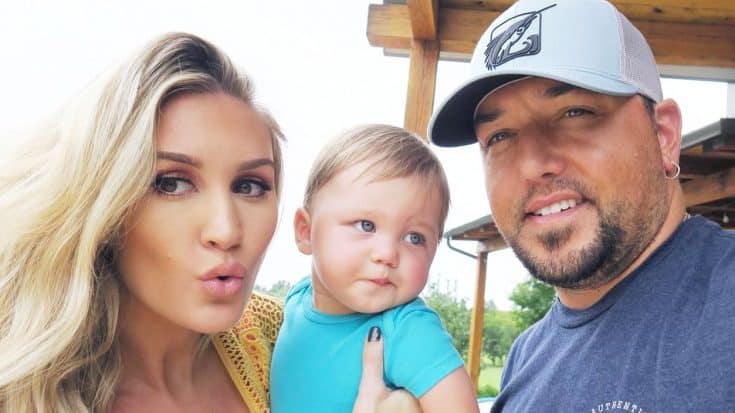 We’ll admit that we love watching our favorite country stars grow in their careers but watching their babies grow up is even better. From their first swim to their first sporting events and everything in between, we’ve seen it all! Country music star Jason Aldean and his wife Brittany have showered the social media world with videos of their everyday life including their sweetest new addition to the family.

Jason and Brittany tied the knot back in 2015. They since then have built their family together including Jason’s two daughters Kendyl and Keeley from his previous marriage. Last December, the couple welcomed their first child together, Memphis.

The new mama documented her entire 9-month pregnancy via Instagram with some of the sweetest snaps. Once their precious baby boy was born, the couple was not shy showing him off! It wasn’t long before little Memphis was watching his first Atlanta Braves game or taking a dip in the pool with dad!

pretty cool moment getting to hang with the family at @suntrustpark today before the show. Really special day for me and my family. Cant wait to play for u guys tonite in the ATL. #lifelongbravesfan

A little over a year after Memphis’ announcement, the perfect couple announced their second pregnancy! With the most adorable photo of Memphis wearing a “Big Brother” onesie, it was clear the spark in this family wasn’t losing its flame anytime soon. Although the couple chose to find out baby no. 2 gender early on, they wanted to surprise their two daughters with a gender reveal at their Nashville home. Jason threw a ball in the air as his oldest daughter hit it revealing its insides as pink. It’s a girl!

But before baby Memphis was ready to welcome his little sister, he wanted to be prepared. Brittany took to Instagram with the cutest video of Memphis taking his first steps! The video shows him in a red and black striped onesie. Ready for his mission, Memphis wobbles over toward his grandpa who is holding a stuffed animal dog. With a full head of hair and (some) words, this big brother is ready to take on the world!

Well, today is the day my baby took his first steps!! ???? He’s getting so big, I can’t take it!!! #10monthsold (y’all know it made me so happy he was walking toward Bentley☺️)