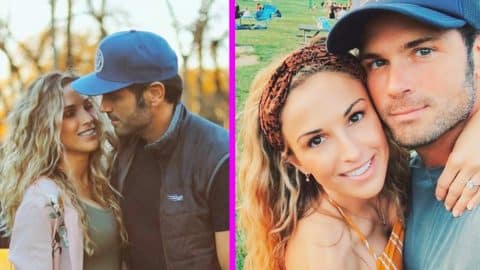 Since her brother is Jason Aldean, Kasi Williams has been given the chance to meet and interact with many country music stars. And she ended up falling in love with one of them…

In 2018, Kasi started dating singer and radio host Chuck Wicks. You probably know him best for his debut single “Stealing Cinderella,” which was released in 2007.

The song reached the fifth spot on the Hot Country Songs chart. You’ve likely heard it played as a father-daughter dance song at wedding receptions.

Speaking of weddings, Chuck and Kasi just celebrated their own marriage!

The couple got engaged in March of this year, and Chuck shared a stunning video from his snowy proposal. He popped the question during a romantic getaway in Alberta, Canada, and his proposal spot looked like a winter wonderland.

About last night….. I lOVE YOU @kasirosa ❤️ We could hear a pin drop in that woods. Nothing but us and the snow falling. It was absolutely perfect. Even if the camera stand I got just for this moment was having some issues. Lol. I’ve waited forever for you and now I will forever be yours. #arewedreaming

Kasi and Chuck made it clear they wanted a short engagement, and they stuck true to their word! The pair tied the knot on Friday (July 12) at the at Cabo Azul Resort in Cabo San Lucas, Mexico.

People exclusively revealed the details about the pair’s nuptials, though the two of them had been expressing excitement about the upcoming ceremony on social media for days prior.

According to People, Kasi’s backless, beaded dress was designed by Galia Lahav, while Chuck’s tux was custom-made from Tom James.

People describes more details of the wedding and the reception, which sounded like a dream come true for the couple:

“Following the ceremony in the El Corazon Chapel, guests enjoyed cocktails around a firepit to the sounds of a mariachi band before Wicks and Williams were welcomed to their reception at Javier’s as husband and wife. The newlyweds then enjoyed a slow dance to Kina Grannis’ version of “Can’t Help Falling In Love” in front of 103 of their closest friends and family members.”

Actually, the word “dream” is the exact one Chuck used to describe the special day when writing about it on social media.

“It was a party from start to finish,” Chuck wrote. “We had all of our closest family and friends and the memories that were made will forever be unmatched.”

A DREAM!! I love you @kasirosa “Wicks”!! See all the details and more pics on the wedding in link above in profile. All Thanks to @people !! Patiently waiting for @andhervisuals video of everything that went down. It was a party from start to finish. We had all of our closest family and friends and the memories that were made will forever be unmatched. The Best thing you can do is to be in the moment and have someone else document for you. We had the absolute best with @andhervisuals @vtylerphotos Can’t thank @amyabbottevents @claudiapalmamurillo for putting together a mind blowing picturesque wedding for us. Photo Cred: @vtylerphotos

Kasi’s famous brother was also in attendance, alongside his wife Brittany. There are no photos of Jason and Brittany at the ceremony, but the couple appeared in a series of pictures taken in Cabo leading up to Kasi and Chuck’s wedding.

If you’d like to see more photos from the ceremony and from Kasi and Chuck’s time in Cabo, visit the People article about their wedding here.

Chuck has a lot of good things going on for him right now. On top of getting married, he recently debuted a new song, called “Started in a Bar.” Give it a listen in the video below.

A huge congratulations to Kasi and Chuck! We wish them many years of love and happiness.