By Miranda Raye on December 14, 2018
Advertisement 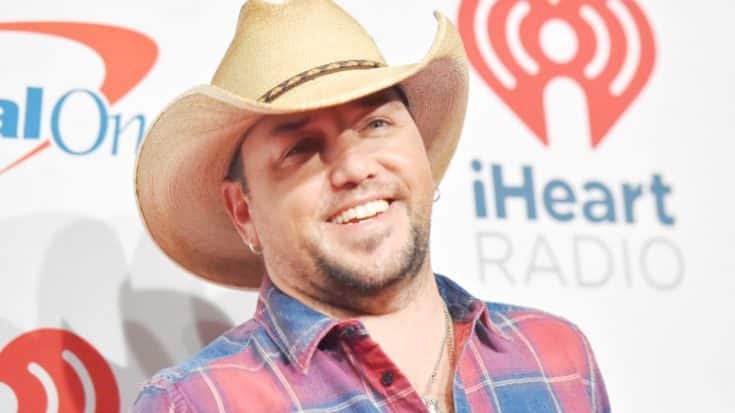 Before Jason and Brittany Aldean‘s son Memphis was even born, fans were already saying that he looked exactly like his father. When Jason shared a 3D ultrasound photo of Memphis in September 2017, it made it pretty clear that the baby boy was going to be his daddy’s spitting image.

But Jason himself actually likened his son to Johnny Cash, based on the fact that he happened to be giving the camera the middle finger!

This is how you know ur kid is gonna be a badass!!! #johnnycashspirit ??#liloutlaw

If anyone had any doubts that Memphis was Jason’s mini-me, those faded away once he was born. Soon, it seemed that every photo Jason or Brittany shared of their baby boy was flooded with comments about how much he looks like his daddy.

Jason made it clear he thinks that Memphis actually takes after Brittany more than him.

People say this guy looks like me… here is a side by side. He is much better lookin than his dad. ? #memphisaldean

But he hasn’t been able to change fans’ minds. As Memphis as grown, it has become all the more obvious that he’s his daddy’s spitting image.

Memphis’ mini-me status was made clear as day in a recent photo Jason shared to celebrate his little one’s first birthday on December 1. Now take a look at this picture and tell us he isn’t a tiny Jason!

Happy 1st Birthday to my main man today. What a blessing you have been to our family. We love u so much Mems!????#goldenbirthday #memphis

But just in case you needed further proof that Memphis is his daddy’s clone, look no further than a photo Brittany just shared. Only this photo isn’t of Memphis, it’s of Jason.

In honor of #ThrowbackThursday, Brittany posted a too-cute-for-words photo of a young Jason all dressed up in baseball garb. “Future Memphis,” Brittany wrote in the caption, making it clear she can see the likeness between a young Jason and her son.

Fans noticed the similarities right away as well, with many proclaiming that Jason and Memphis are “identical twins.” Others begged Brittany to do a side-by-side comparison using Jason’s old photo and one of Memphis. And some people even thought that the photo was of Memphis, and that he was just partaking in some retro photo shoot!

You take a look at the snapshot below and see what you think.

The resemblance is uncanny, isn’t it?

Jason and Brittany will welcome their second child together, a daughter named Navy Rome, within the next few months. Only time will tell if she’ll take after her mommy or daddy!

Listen to Jason explain how he and Brittany chose their baby girl’s name by watching the interview below. It turns out that part of it is inspired by what Brittany originally wanted to name Memphis!