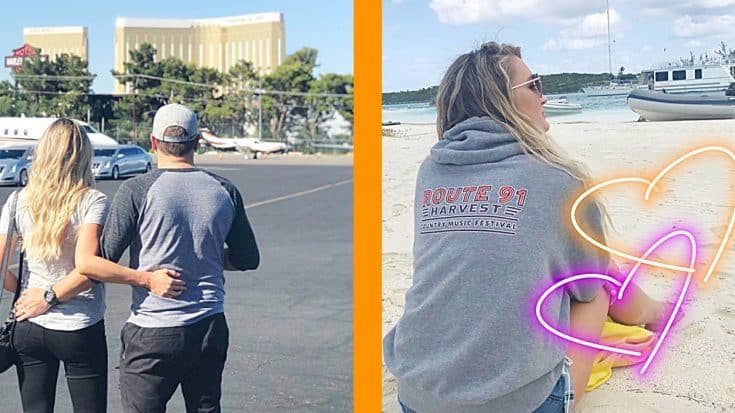 On October 1, 2017, many lives were changed forever, including Brittany and Jason Aldean’s.

Thousands of country music fans flocked to the sold-out Route 91 Harvest Festival in Las Vegas, Nevada, on that fateful day when a gunman opened fire on the crowd from the 32nd floor of the Mandalay Bay hotel and casino.

The headliner for the final night of the festival, Jason Aldean, was finishing his third song and transitioning into his fourth song of the night when the gunfire erupted.  His pregnant wife, Brittany Aldean, was in a tent backstage with local friends as the shots rang out, and she found herself running for her life with the thousands of other concert-goers that were there that night.

On the third anniversary of the shooting that killed 58 people and injured thousands, Brittany and Jason reflected on the night that changed so many lives in a matter of seconds.

“On one hand, it seems like an eternity ago, a nightmare you try to forget. On the other hand, it’s (sic) vividness makes it seem like it was yesterday,” Brittany shared.

She was pregnant with her first child, Memphis, who was born exactly two months after the tragedy on December 1, 2017. Three days after the tragic event, Brittany posted on Instagram about her thoughts during the event and her fear of never being able to hold her baby boy.

Took me a while to be able to write these words… thank you to everyone who has reached out to Jason and I… Means the world to us?

About a week after the shooting, Jason and Brittany went back to Las Vegas to visit some of the victims in the hospital. She recalled the trip on her Instagram stories as being “the hardest trip” they ever made.

The couple showed their support of their “Route 91 Family” on the 3rd anniversary on social media.

See their posts and watch Jason’s tribute to the victims and his first performance after the shooting below.

ROUTE 91? On one hand it seems like an eternity ago, a nightmare you try to forget. On the other hand it’s vividness makes it seem like it was yesterday. 3 years ago… I was 8 months pregnant (had Memphis 2 months to the day from the shooting) and my husband was prepping like any other day to entertain thousands of fans. I used to live in Vegas so I had a bunch of friends at the show… little did we know our lives would change forever. The sound, the chaos, the overwhelming sadness and heartache… it’s something that never leaves you. They call us the “Route 91 Family” in my opinion because we are forever bonded. An experience that thankfully only certain people know. We have LOVED meeting so many of you who were effected on this day, years ago. Our hearts still break for the families who lost a loved one? We are thinking of each and every one of you today, and everyday… and to the men and women who ran towards the bullets to protect all of us… WE ARE FOREVER GRATEFUL?? #vegasstrong #countrystrong

Hard to believe it’s been 3 years since Route 91. That night was probably the worst night of our lives and not a day goes by that we don’t think about the people who lost their lives and the families who have forever been affected by it. October 1st will always be a day for us that is extremely hard to relive. To everyone in the Route 91 family, we love u guys and we couldn’t have gotten through it without you. #CountryStrong #Route91family #VegasStrong