By Miranda Raye on December 20, 2019
Advertisement 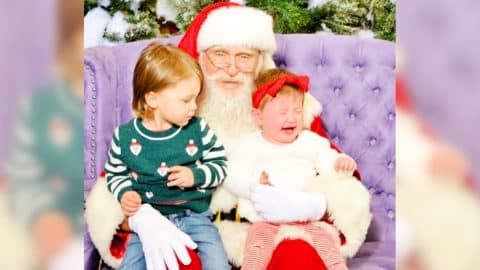 On December 1, 2017, Jason and Brittany Aldean welcomed their first child together, a son they named Memphis. He was just a newborn for his first Christmas.

Now, Memphis is about to welcome his third Christmas. It will be the first Christmas for his baby sister, Navy, who was born on February 4, 2019.

With the holiday fast-approaching, Brittany took Memphis and Navy to get their pictures taken with Santa. And the resulting snapshots were as adorable as could be!

The kids were dressed in festive attire suitable for the occasion. Navy wore a white sweater with candy cane-striped leggings and a matching red hair bow. As for Memphis, he donned a pair of jeans and a green shirt with cartoon Santa faces printed on the front.

Both Memphis and Navy can be seen looking at the camera in the the first picture of Brittany’s Instagram slideshow. But the second photo shows Navy crying, making it clear she was a little more timid than her brother when it came to interacting with Santa.

A third photo in the slideshow shows that Navy quickly got it back together, and seemed content once more. That third picture also shows Memphis seemingly striking up a conversation with the jolly, bearded man.

We wonder if he was telling him what he wants for Christmas this year?

After sharing the pictures the kids took with Santa, Brittany posted another photo from their festive outing. The picture shows Brittany giving a smiling Navy a kiss on the cheek while they stood out in the middle of the mall.

Isn’t Navy precious? She has grown up so fast! It’s hard to believe that she’s almost a year old.

It’s also crazy to see how grown up Memphis is in comparison to last Christmas. On Christmas Eve 2018, Brittany shared a photo and a video that showed Memphis celebrating the fact he got a new boombox.

The little guy could be seen dancing along to the music without a care in the world. Check out that adorable video by flipping through the slideshow below.

Join us in wishing Jason, Brittany, and their family a Merry Christmas this year!

My handsome little dancing machine got a boom box! Swipe right for some Christmas dance moves🕺🏼🎼