By Miranda Raye on June 1, 2020
Advertisement 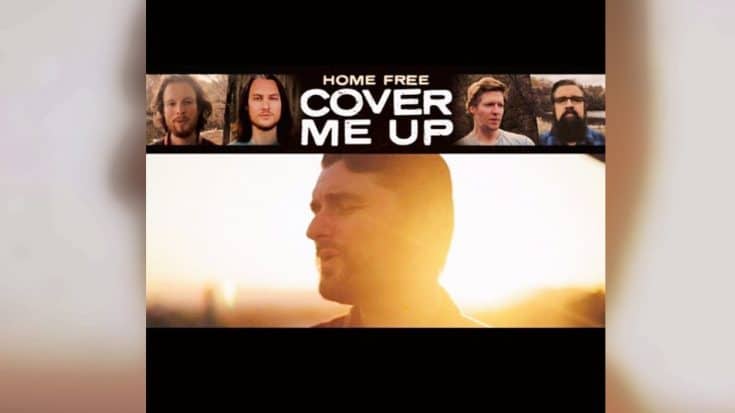 Jason Isbell‘s “Cover Me Up” is a song that speaks straight to the heart. Isbell included the tune on his 2013 album Southeastern after writing it for his wife, Amanda Shires.

“That was a hard one for me to even get through without breaking down the first time, because that one is really personal,” Jason told NPR in 2013. “It’s not easy to sit down and open yourself up and say, ‘This is how much I love you,’ you know? It’s scary to do that.”

The song has since earned a number of notable covers, including renditions by Morgan Wallen and Season 17 Voice winner Jake Hoot.

One of the most unique remakes of the song comes from a cappella group and The Sing-Off winners Home Free. Since they are an a cappella group, Home Free delivered their version “Cover Me Up” without the use of any instruments. The only sounds you hear on their recording are the sounds of their voices.

Their arrangement places baritone harmony singer Adam Chance front and center, as he takes the lead throughout the song. It only seemed fitting to have him sing the tune, since it means a lot to him and his sweetheart, Sami.

“I’ve loved this song since it came out,” Adam said on Instagram. “It also quickly became mine and Sami’s song when we started dating, so it meant a lot for me to sing this.”

I’ve loved this song since it came out. It also quickly became mine and Sami’s song when we started dating, so it meant a lot for me to sing this. I hope you’re all enjoying it. Check it out over at our YouTube page!

Because of Adam and Sami’s close connection to the song, Home Free decided to include a special clip of the couple at the end of their music video for “Cover Me Up.” The clip shows Adam getting down on one knee to propose to Sami at home in their pajamas.

Adam originally planned to propose in Paris while Home Free was on their European tour in 2020. But when the group had to return home early due to everything going on in the world, he changed his plans.

He opted for a more low-key proposal at home, telling People:

“March 17 was our two-year anniversary, so I just decided to go for it,” he said. “We were wearing onesies, and she thought we were about to record something goofy for Instagram — but I got down on one knee instead. I couldn’t wait. It was the best decision I’ve ever made.”

Thank y’all for the nice messages and well-wishes today. Also, huge thanks to @people for the great write-up on our engagement. I feel so grateful for everything.

Even though Adam’s proposal wasn’t as “grandiose” as he originally planned, Sami believes it was perfect for them:

“I’m so thankful it happened the way it did because we were able to really absorb the moment and celebrate it fully without any outside factors,” she told People. “We could not be more excited to take on this life together.”

Adam and Sami got married in 2022. May they enjoy many happy years together!