By Jennifer Pernicano on November 21, 2022
Advertisement 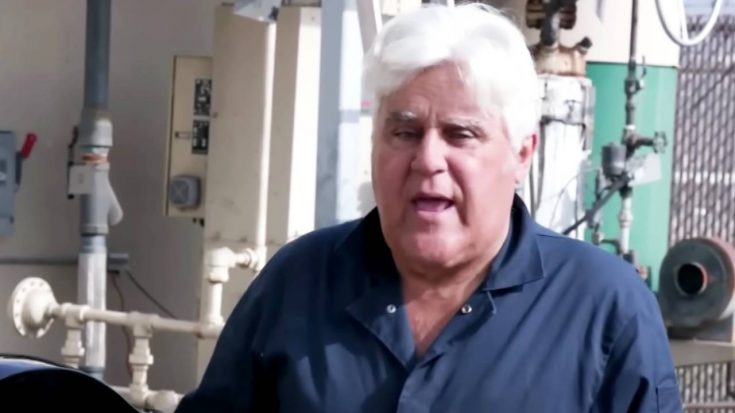 Comedian Jay Leno, who also is famous for being the former host of The Tonight Show, cancelled a scheduled performance at a financial conference in Las Vegas on Sunday, November 10th. The Financial Brand’s conference, titled The Forum, had Leno slated to perform from 7-8pm at the Aria Convention Center West.

According to PEOPLE, The Financial Group sent out an email to attendees revealing that Leno had cancelled his performance.

Part of the email read:

“His family was not able to provide us very many details, but there was a very serious medical emergency that is preventing Jay from traveling. All we know is that he is alive, so our prayers go out to him and his family tonight.”

Leno himself made a statement to Variety, explaining what happened:

“I got some serious burns from a gasoline fire. I am ok. Just need a week or two to get back on my feet.”

TMZ was the first to report on Monday (Nov. 14) that Leno had suffered burns on his face (but not his eyes or ears) after a fire ignited in his car garage. The publication reported that Leno was admitted to the Grossman Burn Center.

More details have come to light on Tuesday (Nov. 15).

Leno spoke with TMZ from his hospital bed, and told them that he was fixing a clogged fuel line on his 1907 White steam car.

While working on the fuel line, there was a leak and “gasoline sprayed on his face and hands,” TMZ wrote. There was a spark that “triggered and explosion,” which set Leno on fire. His good friend, Dave, was nearby and acted quickly, jumping on the late night host and smothering the flames.

George Swift, who has been an employee of Leno’s for the last 15 years told PEOPLE, “He’s a tough guy, he’s going to be fine. It’s nothing life-threatening. He’s in great spirits, but you know, it’s going to take awhile.”

Leno’s doctor at Grossmont Burn Center, Dr. Peter Grossman, said in a press conference, “When got pulled out from the area underneath the car, it was noted that he had pretty significant burns to face and hands. His burns include his face, his hands, and his chest, the burns are fairly significant.”

Grossman also revealed that he performed surgery on the former late night talk show host, and there is one more scheduled this week.

“Some of the burns to the face are a little deeper and a little more concerning. Right now they’re in that progression of somewhere between deep second and third-degree burns to the face,” he said. “We’re hoping we can keep them from progressing by using these alternate treatments, including good wound care and hyperbaric oxygen and aggressive surgical management.”

Even though he has extensive injuries, Grossman said his spirits are high.

“He’s Jay Leno, he’s walking around, he’s cracking jokes,” he said, and made sure to emphasize that Leno is “incredibly kind” to the staff.

Grossman concluded, “His injuries are serious, his condition is good. I do anticipate him making a full recovery.”

Well, 10 days after being admitted to the Grossman Center, Leno is going home!

According to PEOPLE, his doctors released the following statement:

“Comedian Jay Leno was released from the Grossman Burn Center today. After a 10-day stay at the facility, Jay will receive follow-up care at the Grossman Outpatient Burn Clinic for burns to his face, chest and hands he received during a fire at his home garage. Jay would like to let everyone know how thankful he is for the care he received, and is very appreciative of all of the well wishes. He is looking forward to spending Thanksgiving with his family and friends and wishes everyone a wonderful holiday.”

The burn center also released a photo of Jay’s with some nurses, and you can really see his burns.

Jay Leno posed for a photo with hospital staff as he said goodbye, revealing some of the burns to his face, neck and hand. https://t.co/BAe1zAiyG6

We will keep Jay in our prayers.