Jeep Destroyed After Rolling Down Mountain

By Manly Bryant on October 12, 2020
Advertisement 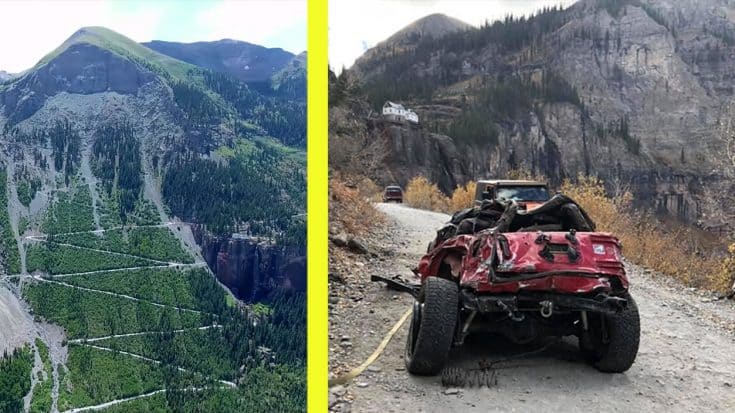 Black Bear Pass outside Telluride, Colorado is an off-road trail, notorious for its steep, extremely narrow, and very treacherous path. Accidents happen, even with the most experienced drivers.

On October 10, 2020, a woman and two dogs were in a Jeep Wrangler waiting for the driver to return from helping another car when it slid off the trail, ejecting her while rolling several times. While the vehicle was completely destroyed, the female passenger miraculously survived with serious injuries. One of the two dogs is also reported missing, while the other is reported okay.

“The 22yr old male, who was the driver of the Jeep Wrangler Sport, told Deputies he had shut off the engine, applied the emergency brake and stepped out of the vehicle to help direct a driver behind him around a tight turn. The Jeep started to roll with his 23yr old female friend in the passenger seat. He tried to jump back into the vehicle to try and steer it, but he was thrown into rocks when it left the road.”

The Jeep then rolled down several switchbacks, ejecting the female passenger before it came to rest on the roadway below. Both patients, who are the driver and passenger, were taken by EMS to the Telluride Medical Center; he with minor injuries, and she with more serious traumatic injuries. The female passenger was later flown to St. Mary’s Hospital in Grand Junction for further care.

There are no further updates on the condition of the two. While one of the dogs was recovered and okay, they are still missing the 10-month-old black lab that was flung from the vehicle.

Our prayers for a full and speedy recovery for both the young man and woman.

To see more of the trail they were on, watch the video below.