By Jennifer Pernicano on December 12, 2018
Advertisement 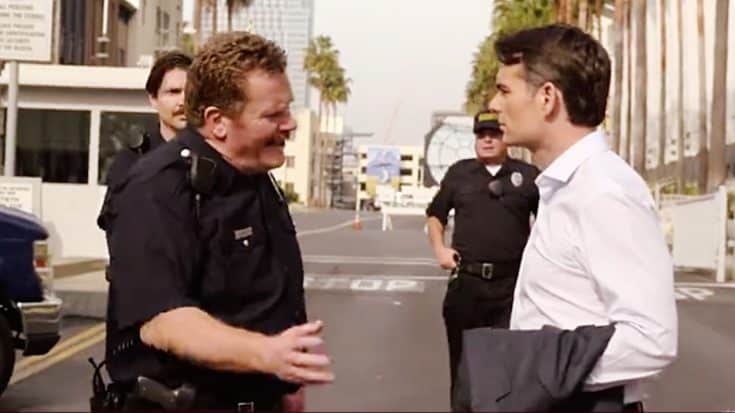 It’s not uncommon for NASCAR drivers to get in trouble with the law – especially because they’re used to driving as fast as they can! But, this story involving Jeff Gordon and a local police officer had an unexpected twist…

During an episode of Dale Earnhardt Jr.‘s weekly podcast and web series, the two retired NASCAR stars and former teammates sat down and chatted about life, work, and other fun topics – and then somehow Jeff’s police encounter came up.

THIS JUST IN: Dale Earnhardt Jr. (concussion) will miss next two races. Jeff Gordon to fill in. (via @TeamHendrick) pic.twitter.com/ZYsCBaixJd

Both Dale Jr. and Jeff have been friends for years – ever since Dale Jr. joined Hendrick Motorsports as a driver back in 2007. Jeff was already a Hendrick driver and when he got wind that Dale Jr. had gotten a spot on the team, he thought it was a perfect time for a congratulatory phone call.

But that’s where this story takes an interesting turn…and ends in a humorous twist.

A fan reminded Jeff of this run-in with police when the show was doing their Q&A segment live, and the hysterical story will have y’all rolling!

Apparently, back in the day when Jeff was getting ready to dial Dale Jr. for this congratulatory phone call, he didn’t have a hands-free system set up in his personal car. So, he decided to risk it and just make a call holding the phone up to his ear.

Well, Dale Jr. picks up and the two are chatting for a few minutes. Jeff is welcoming him to the team and so on. All of a sudden, he spots flashing blue lights in his rearview.

“So, I wasn’t sure if I should stay on the phone with Dale or not, but I said, ‘No no, stay on here. I may need you.’ And luckily I did because first, the guy says to me, ‘You know you’re not supposed to be on a cellphone.’ And then second, he’s like, ‘And you were speeding.’ And I just said — and I never do this, but I said this is the moment I’ve got to pull this off.”

“I said, ‘I know, I’m sorry. You don’t happen to be a Dale Earnhardt Jr. fan, are you?’ And he’s like, ‘Well yeah, why? What does that have to do with anything?’ And I said, ‘Well I’ve got him on the phone. I was congratulating him on something.’ And he goes, ‘What?’ And I just handed the phone off and you spoke to him for two seconds and got me out of it!”

Hysterically, somehow Jeff Gordon just ended up with the right cop – and the right NASCAR driver on the other line! But, we wonder if the cop realized who he was talking to!

Surprisingly, this isn’t the first time Jeff’s had a run in with the police – check out his “high-speed chase” below along with the full interview from Dale Jr.’s show.