By Jennifer Pernicano on January 25, 2022
Advertisement 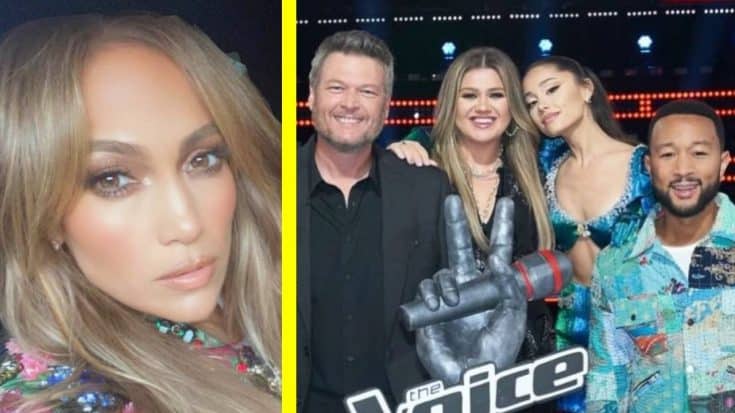 The Voice may be taking some time off in the Spring, but that doesn’t mean they aren’t making moves behind the scenes.

The Voice‘s 21st season kicked off on September 20, 2021 with returning coaches Blake Shelton, John Legend, and Kelly Clarkson. They were joined by first-time coach Ariana Grande.

Just a few days after the season premiere, an article was published, claiming that producers were looking to fire Blake Shelton and get “fresh” talent thanks to a boost in ratings because of Ariana Grande. Clearly, this wasn’t the case because Shelton texted Grande the article in jest and said, “Thanks a lot Ari… Thanks a f–n’ lot…” Grande posted a screenshot to her Instagram on September 24, 2021.

Months later, these rumors are still swirling and the rumors even have a new coach attached to them. That person is: Jennifer Lopez. She performed on the show on December 15th.

Different entertainment sites are reporting that many of the higher ups at the network attended the taping and had conversations with Lopez and her team, apparently “trying to convince her to join the show full-time.”

Some are convinced Lopez will be a coach for Season 22, but who will she replace? An insider says that “it is safe to say that Ariana won’t be back.” NBC thought bringing Grande in would be a sure-fire ratings boost, although it didn’t do much to help. She also didn’t bring a single artist to the finals.

It’s not uncommon for a first-time coach to not be brought back immediately, seeing as at least one chair on the coaching panel has been “revolving” for the entirety of the series.