By Manly Bryant on December 30, 2019
Advertisement 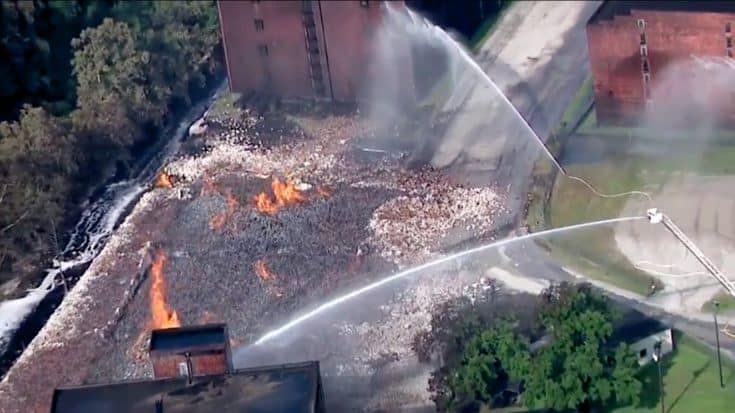 The July 2019 fire caused a great deal of damage – not only to the Jim Beam facility itself – but to the nearby environment and the Kentucky River.

That warehouse happened to belong to Jim Beam and was housing thousands of barrels of bourbon whiskey. According to WLEX in Lexington, Kentucky, two barrel houses at this Jim Beam aging facility caught fire late Tuesday night (July 2) after a small fire started and then quickly grew and spread.

In case you’re wondering how much heat 45,000 burning barrels of bourbon puts off – it melted the tail lights on this fire truck. @WLKY pic.twitter.com/BUYv8mmRGU

Although fire crews were working tirelessly to put the flames out, the warehouse had lots of fuel – wood and alcohol – keeping it going well into Wednesday. Four days later, fire crews were still putting out hot spots on the property.

A Jim Beam spokesperson released a statement on behalf of the company on July 3, saying:

“We are thankful that no one was injured in this incident, and we are grateful to the courageous firefighters from multiple jurisdictions who brought the fire under control and prevented it from spreading. Initial reports suggest that the fire resulted from a lightning strike, and we will work with local authorities to confirm the cause and to remediate the impacts.

We have a comprehensive warehouse safety program that includes regular inspections and rigorous protocols to promote safety and the security of our aging inventory. We operate 126 barrel warehouses in Kentucky that hold approximately 3.3 million barrels for our brands, and the warehouse that was destroyed contained 45,000 barrels of relatively young whiskey from the Jim Beam mash bill. Given the age of the lost whiskey, this fire will not impact the availability of Jim Beam for consumers.

We appreciate the support of our neighbors and the Kentucky Bourbon community as we manage through this incident.”

The facility, which sits right on the Kentucky River, leaked an unknown number of barrels of whiskey into the river and it has killed thousands of fish. Most of the fish were either catfish, perch, or carp. Crawfish also were discovered living in that part of the river as well.

Now, just over six months after the incident occurred, the fines and penalties imposed upon the bourbon company have been revealed – just before the turn of the new year.

According to an article from NKYTribune, Jim Beam will be required to pay a fine of $600,000 to help fix the environmental fallout caused by thousands of gallons of bourbon leaching into the Kentucky River.

Additionally, they will reimburse The Kentucky Energy and Environment Cabinet $112,000

Watch the news coverage of the fire below.