By Miranda Raye on May 3, 2018
Advertisement 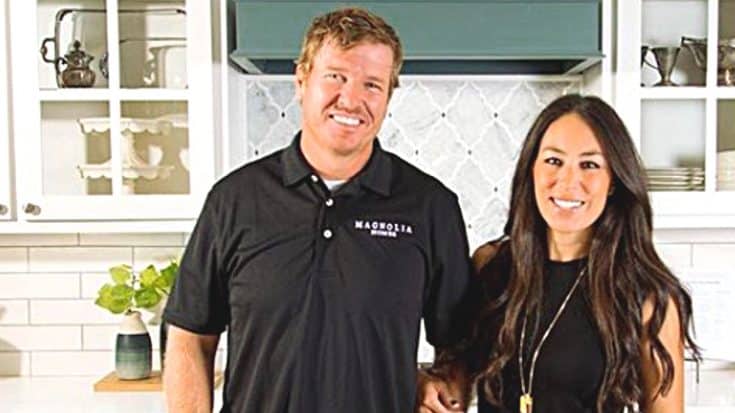 Ever since Fixer Upper stars Chip and Joanna Gaines told the world that they are expecting their fifth child, they’ve made an effort to keep everyone informed about all things to do with the new baby. We eventually learned that baby Gaines would be a boy, which means that he will have a “D” name like his two older brothers, Duke and Drake.

From time to time, Joanna will share a photo to show her fans how much her baby bump is growing. The last major bump update she shared was on her 40th birthday, when she posed for a photo while eating doughnuts.

“This is 40. And I like it… ” she wrote, along with the hashtag #pregnantandforty.

As you can tell from her fans’ response to that photo, people get just a teeny bit excited whenever she shares a baby bump update. So you can bet that fans were over the moon when they received their latest issue of Magnolia Journal, the Gaines’ official magazine.

The summer-themed issue features a pregnant Joanna as the cover star, wearing a vibrant yellow dress with a white floral pattern. She looks radiant as ever, and also has her baby bump on full display.

Only subscribers are able to get the magazine. But thanks to one excited fan, you can see the gorgeous photo of Joanna below.

?Look what just arrived!!? Give me a second while I do my #happymail dance. Anybody else been missing their weekly dose of @chipgaines and @joannagaines as much as I have been???‍♀️??‍♀️??‍♀️??‍♀️Thank goodness I still get this little treasure quarterly. . . . This week is kind of crazy for us, with just getting home from one vacay, getting ready for another and having really good friends staying with us in between. I am going to lock myself in a room with this little bit of inspiration and have a little quiet time. ?. . . . #fixerupper #babybump #quiettime #magnoliajournal #alltheinspiration #fixerupperobsessed

She looks so beautiful!

Chip and Joanna haven’t revealed their exact due date, but we do know that baby Gaines is set to make his debut some time this summer. With that in consideration, it seems fitting that Joanna posed for the summer issue of Magnolia Journal while pregnant.

That baby boy will have plenty of playmates when he comes into the world. Along with big brothers Duke and Drake, he’ll also get to play with big sisters Emmie Kay and Ella Rose.

You can learn more about the four Gaines children by watching the video below. We can’t wait for their baby brother to get here!