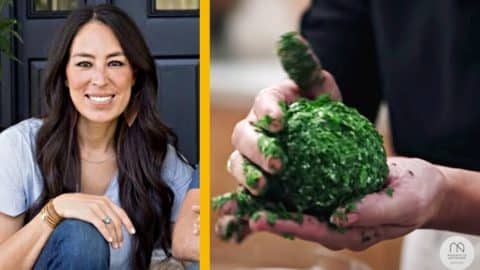 Joanna Gaines recently launched the cooking show Magnolia Table, and in a new episode, the former HGTV star shared a cheese ball recipe that is sure to impress at any party.

Joanna revealed that she had to come up with her cheese ball recipe rather quickly. Chip’s family are big fans of the appetizer, but luckily the dish is easy to make!

“Cheese is a staple in the Gaines household,” Joanna revealed in the episode. “And even Chip’s parents….Anytime we go over there for a holiday, there’s always cheese balls out, so I feel like it’s just something I had to learn quick.”

Joanna demonstrated how to make three different cheeseballs. First, Joanna uses the same cheese base for each ball. The interior designer uses an ice cream scoop to cut down on mess, but Joanna admits that she usually embraces the chaos.

“I think if your kitchen is not messy, you’re not having fun,” Joanna tells fans.

Joanna coats each cheese ball with different toppings. In this case, Joanna used chopped walnuts, pepper, and fresh chopped parsley. After each ball is coated, Joanna sets the appetizer in the fridge for at least three-to-four hours.

Watch Joanna share her full recipe in the video below!