By Miranda Raye on September 21, 2022
Advertisement 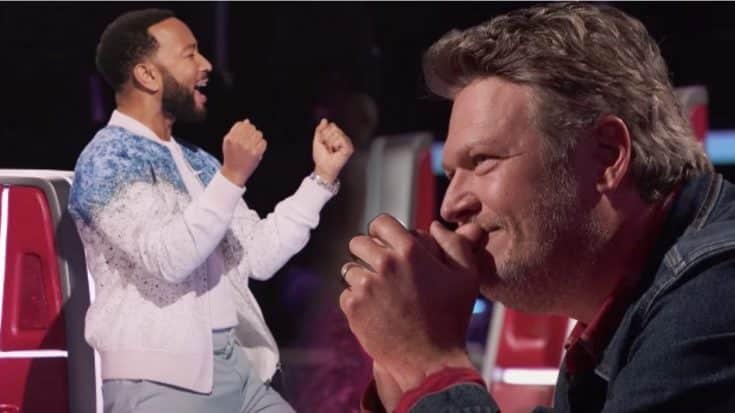 Each Voice coach can only use their “block” one time during the blind auditions. So they have to be strategic to make sure they put it to good use.

When John Legend heard Peyton Aldridge sing the Marshall Tucker Band‘s “Can’t You See” during the auditions for Season 22, he knew Blake Shelton would want Aldridge for his team. So Legend jumped at the chance to use his block to ensure that wouldn’t happen.

Legend was actually the first coach who turned a chair for Aldridge. Shelton was wanting to turn too, but he was suspicious. He had a feeling Legend used his block on him.

He tried asking his wife, Gwen Stefani, if she could tell if Legend blocked him. She played coy, saying “I don’t know.”

“D— it,” Shelton said while shaking his head.

Stefani turned her chair soon after that, and Shelton wasn’t far behind. He kept his hands over his eyes as he turned, because he knew he’d see the word “BLOCKED” in front of his chair on the stage…and he did.

After Aldridge finished singing, Legend explained why he chose to use his block on Shelton:

“You talking about Team Blocked?” Shelton fired back.

“Yes, Team Blocked,” Legend responded. “Peyton I only had one block to use, but I decided to use it on you.”

Aldridge told Legend he loves his song “All of Me.” Legend asked if he’d sing part of the song, and he did. He even jumped onstage to sing with Aldridge at one point.

Shelton was clearly a little salty about the whole situation. “John Legend can kiss my a–” he joked. He threw his support behind Stefani, since he obviously didn’t want Legend to get Aldridge.

But his pleas didn’t pay off. Aldridge chose Legend anyway!

Head below to watch Aldridge’s outstanding audition and see the hilarity that ensued after Legend blocked Shelton.