By Miranda Raye on November 19, 2018
Advertisement 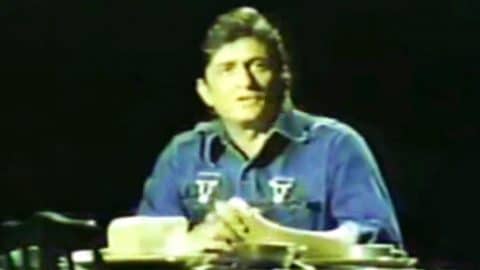 What Thanksgiving Is All About

Every Thanksgiving, families and friends gather to enjoy good food and great company. But often too much focus is placed on the former, and people end up forgetting what the holiday is truly about.

You see, Thanksgiving is meant to serve as a day of reflection and gratefulness. Instead of thinking of nothing but turkeys and mashed potatoes, you’re supposed to take the time to give thanks for the people and things that are a part of your life.

Since so much focus has been placed on the food associated with Thanksgiving, those who are unable to provide the traditional feast often feel bad for being unable to do so. But even if they don’t have a huge turkey to serve, or don’t have a turkey at all, they still have something to be thankful for.

Johnny Cash perfectly captured these feelings during a rare performance that took place some time ago. A clip of this performance resurfaced online in 2010, and shows Cash in one of his shining moments.

Not much is known about the clip. We have no date, no show location, and not even a song title to go by. But what we do know is that the clip portrays one of the best performances we’ve ever seen from Cash.

“The Man in Black” ditched his usual dark attire and opted to wear a collared shirt and a pair of overalls. As he started to recite a special Thanksgiving prayer, it became clear that Cash had dressed that way to take on the role of a farmer. It is from that farmer’s perspective that Cash prayed:

Playing The Part Of A Simple Farmer

As you follow Cash through his prayer, it becomes clear that the farmer and his family don’t have much to their name. The year was bad for their crops, and they were unable to serve turkey for Thanksgiving. While they may be lacking food and money, the farmer still finds plenty of reasons to be thankful.

Speaking about his wife and children, the farmer reveals they are all he needs in life. To him, nothing else matters, because the ones he loves are who make him feel rich:

“Thank you for my good wife, Lord, and the children that I’ve got. And they love me for the things that I am, and they forget the things I’m not.”

Cash followed up his prayer with a short performance of a song that was also all about thankfulness. For whatever reason, this song was never released, so we’re quite lucky to have it in this clip.

As you celebrate this Thanksgiving, remember the words that Cash recites in this prayer and song. We can’t think of a better way to express what the holiday is truly about.