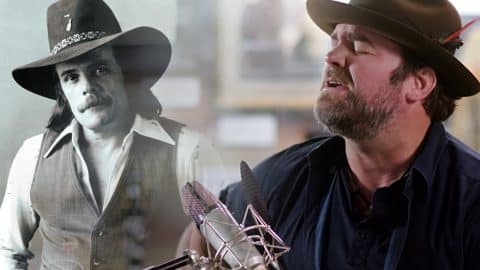 Seated with just a guitar in his hands and a live microphone reaching for any bit of sound, country music’s own Lee Brice strummed slowly as he began a one-of-a-kind performance that honored the late Johnny Paycheck.

Inside the historic walls of The George Jones Museum in Nashville, Tennessee, Brice joined Country Rebel for a series of acoustic songs and an afternoon of incredible music.

“Old Violin” –  a true Johnny Paycheck classic – was first released in 1986 and became his final success on country radio charts before he stopped releasing singles in the mid-1990s.

Giving his own sound to this beloved country classic, Brice pours every bit of his heart and soul into an acoustic performance that will truly give you goosebumps! Each note is sung and played with great skill, moving tenderly through the song – delicately, but also with great strength.

Sharing this amazing moment with fans on Twitter, Brice explained that “Old Violin” is “one of the first songs [he] ever learned to play guitar.”

Truly, this moment has been a long time in the making and the unforgettable performance by Lee Brice is something you’ll come back for…again and again.

Watch Lee Brice’s tribute to the incomparable Johnny Paycheck below.