Josh Turner Takes Us To Church With His New Gospel Album

By Manly Bryant on September 21, 2018
Advertisement 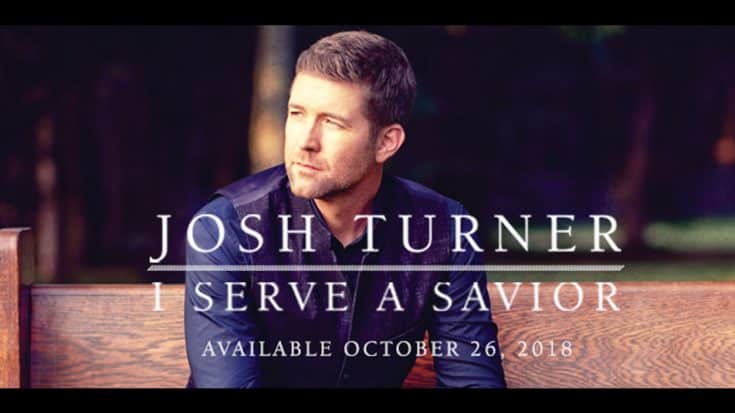 It’s an album Josh Turner hopes will leave you singing “Hallelujah!”, from boots to the Bible, the singer gives us a glimpse into his deep-rooted faith.

Set to release this October 26th is Josh Turner’s latest album I Serve A Savior; a full-length gospel record.

Hey y’all, beginning today you can pre-order my new album I SERVE A SAVIOR. This project is a collection of some of my favorite gospel hymns – old and new. Hope you like it! Link to order in bio!

Growing up in a Christian household, Turner explains he has faced a plentiful of spiritual experiences that helped inspire this album. Although he started by kicking his boots through the country door, he admits in his album teaser that he “has always wanted to do a gospel album.”

Aside from personal experience, Turner hopes this album will shine Jesus’ light into the entertainment world.

“I know from experience that the message in the songs from this record are messages of true hope and it’s hope that you can actually cling to and count on.”

I Serve A Savior wouldn’t be complete without the help from some familiar faces. Featured on the gospel album is a co-written song by his wife Jennifer, and their eldest son, Hampton. On the same record, his three youngest sons show off their golden vocals as well. (That’s one talented pack!)

The album will cover an array of Christian classics that Turner grew up listening to as well as original songs and live recordings. “I Serve A Savior” is the first track to be released before the album’s reveal date.

Although this won’t be the first time we’re hearing a spiritual hymn from the country music star. You might remember Turner’s 2009 single “Me And God” which tells the story of the father-son relationship he held with the Lord. Turner describes being “a team” with God even in the hardest of times. This heartfelt single foreshadowed the type of music Turner had faith he would produce at some point during his career.

Turner knew we couldn’t wait a month for the release, thankfully he treated us with a live session of his “I Serve A Savior.” Watch below.

And if you’re as excited as we are, you can pre-order the album here: http://strm.to/IServeASavior