By Manly Bryant on August 29, 2018
Advertisement 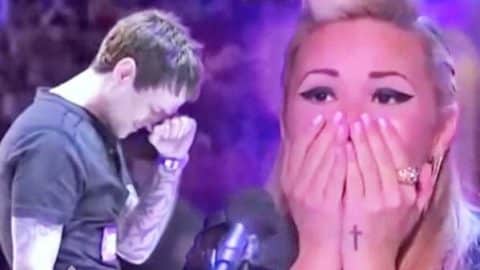 When Jeff Gutt walked out onto the stage of The X-Factor, he was just hoping that he could show off some skills and get a little publicity for his local singing career and make his son proud. What actually happened, however, is a truly heart-warming story.

Jeff Gutt, who sang on XFactor, looks a lot like @johnnyhanel. It's kind of freaking me out. pic.twitter.com/IjAbWGWPH0

Gutt told the judges he was there to sing for them and when he announced he’d be singing Leonard Cohen’s famous track “Hallelujah”, some of them looked at him like he was being a bit too ambitious.

As he began singing, the audience literally roared to life – completely overwhelmed by the singer’s beautiful gift for song. Gutt received the standing ovation he deserved when the song was finished and the entire crowd was in tears!

Check out who was dining at Bath City Bistro over the weekend… X Factor runner up, Jeff Gutt and his son, Talon. pic.twitter.com/ylNVzuwngy

“I’ve heard that song a lot. I’ve sat in this chair a long time, and it was one of the most brilliant auditions I have heard,” Simon Cowell gushed.

“Hallelujah” was originally released in 1984 from Cohen’s album, Various Positions. In 1994, Jeff Buckley covered it on his album and it gained tremendous attention worldwide, becoming one of the most-covered songs of all time!

Watch this incredible performance of this timeless song in the video below! We are certain that Jeff’s son was so proud of his dad!