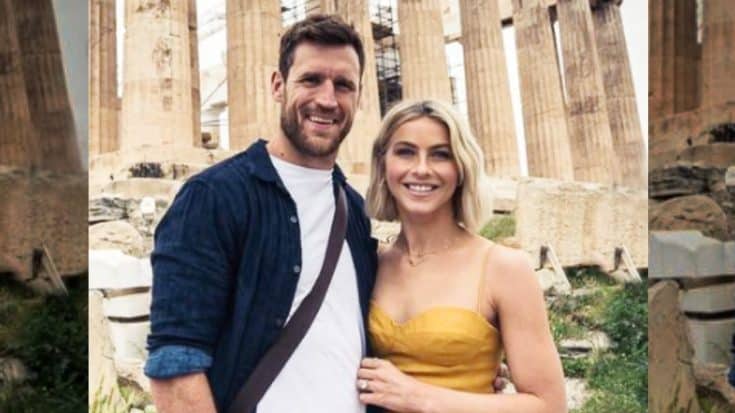 Unlike many celebrity splits, the divorce settlement of professional dancer Julianne Hough and her ex-husband Brooks Laich has reportedly been cordial.

The pair, who wed in 2017, split up in 2020 and filed for divorce a year later. According to legal documents obtained by The Blast, Hough and Laich’s divorce is now official and their settlement only leaves one item up for negotiation….her $350,000 wedding ring.

The documents report that a prenuptial agreement allows the Dancing With The Stars pro to keep everything she owned prior to saying “I do.” That includes properties in Los Angeles, California, and College Grove, Tennessee, as well as “artwork, china, silverware, collectibles, furniture, furnishings and appliances.” The Blast also reports that Hough will keep her Tesla Model X.

Laich, a former professional hockey player, gets to keep his 2017 Ford F-150, a 2019 Duckworth, his property in Coeur d’Alene, Idaho, and his NHL pension and retirement.

The fate of Julianne’s 7-carat ring is the only item of business that the pair will have to “meet and confer about.”

Julianne Hough and Brooks Laich married in 2017 after a two-year engagement. The pair said their vows in a stunning lakeside ceremony in Idaho that was attended by more than 200 of their closest friends and family. In March 2020,  after nearly three years of marriage, Julianne and Brooks issued a joint statement announcing their separation.

“We have lovingly and carefully taken the time we have needed to arrive at our decision to separate. We share an abundance of love and respect for one another and will continue to lead with our hearts from that place. We kindly request your compassion and respect for our privacy moving forward.”