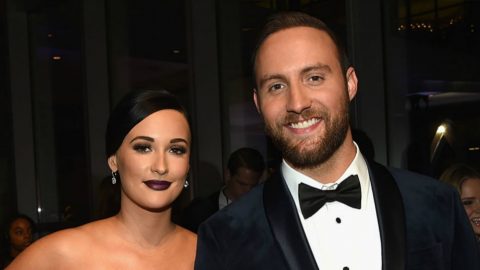 After 2 1/2 years of marriage, country singer Kacey Musgraves and musician Ruston Kelly are divorcing. The pair announced the news in a joint statement issued to the Associated Press and posted on their respective social media accounts.

“With heavy but hopeful hearts we wanted to put our own thoughts into the air about what’s happening. These kinds of announcements are always met with scrutiny and speculation and we want to stop that before it even starts. We believe that we were put into each other’s lives for a divine reason and have both changed each other infinitely for the better. The love we have for each other goes far beyond the relationship we’ve shared as husband and wife. It’s a soul connection that can never be erased,” the emailed statement read.

“We’ve made this painful decision together — a healthy decision that comes after a very long period of trying the best we can. It simply just didn’t work. Though we are parting ways in marriage, we will remain true friends for the rest of our lives. We hold no blame, anger, or contempt for each other and we ask for privacy and positive wishes for us both as we learn how to navigate through this.”

The couple wed in October 2017 in a “forest ceremony” held in Tennessee, nearly one year after Kelly proposed to the singer.

Kacey credited Ruston with inspiring many of the songs that made up her Grammy Award-winning album, Golden Hour. After winning the coveted all-genre Grammy for the project, Musgraves thanked her husband, saying: “I love my husband so much. This album wouldn’t have been created without you.”

Musgraves and Kelly, both 31, appeared together on the song “To June This Morning” from the album “Johnny Cash: Forever Words.” The project was created from Cash’s unknown poetry, lyrics and letters set to music. “To June This Morning” was composed by Kelly who turned a love letter that Johnny Cash wrote to June Carter Cash into a ballad. The music video for the song was filmed at the remains of Johnny and June’s home at Old Hickory Lake in Hendersonville, Tennessee.

Watch the music video for “To June This Morning” featuring Kacey Musgraves and Ruston Kelly below.