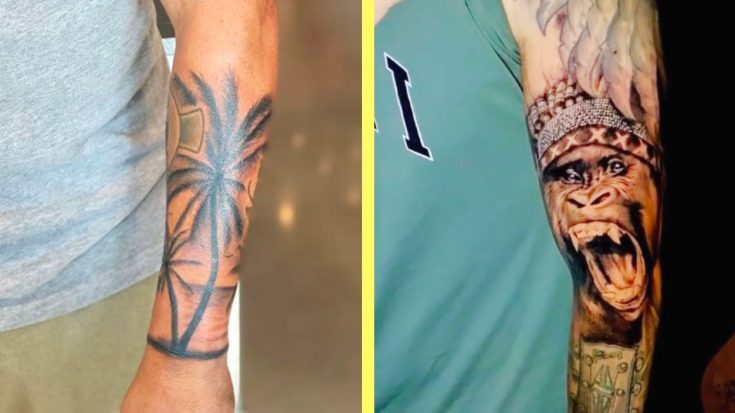 Both Jason Aldean and Kane Brown are sporting some fresh ink on their arms right now!

The two country-singing best buds got new tattoos on the same day after tattoo artist Bubba Irwin paid them a house call. Some of you may be familiar with Bubba’s work, since he was the Season 9 winner of the hit television series Ink Master.

Kane went first, and got a striking image of a fierce gorilla tattooed on his arm. While Bubba did the majority of the work, Kane said Jason jumped in to complete one line of the tattoo.

“@jasonaldean did his first ever tattoo on me and it’s pretty bad ass…lol nah he did one line my boy @bubbaitattoos did an amazing job!!” Kane wrote. He also posted a video of his new ink so all of his fans could see it.

@jasonaldean did his first ever tattoo on me and it’s pretty bad ass ??? lol nah he did one line my boy @bubbaitattoos did an amazing job!! Hit him up if u need a tattoo ??

In his own post about Kane’s tattoo, Bubba said the artwork isn’t finished yet, so there is still some more work to be done.

Jason went after Kane, and got a beach-themed tattoo with palm trees on his lower arm. The ink surrounds a script tattoo of his youngest daughter’s name, Navy. It also encompasses an older piece of art…a cross containing the names of his eldest daughters, Keeley and Kendyl.

Jason showcased his new tattoo from multiple angles in an Instagram slideshow. “Thanks to my dude @bubbaitattoos for making a house call today!” Jason wrote.

See the images of his tattoo below!

In his own post about Jason’s tattoo, Bubba said it also isn’t quite finished yet. It will be a couple more months until it’s complete, as they made plans to finish the piece in September.

What do y’all think about Jason and Kane’s new tattoos? There’s no denying that Bubba is a talented tattoo artist!