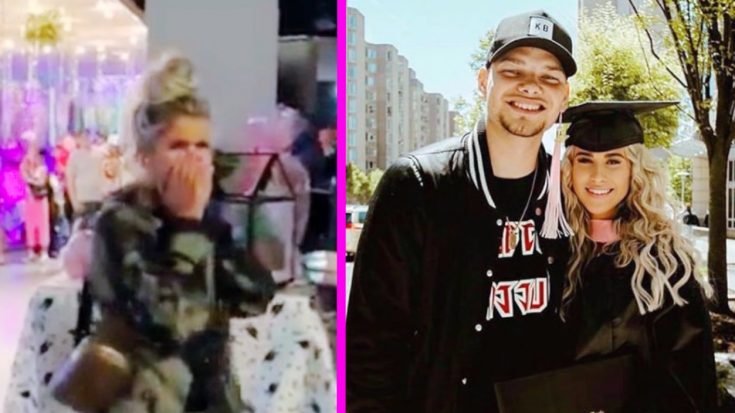 So Much Is Happening In Kane & Katelyn’s Lives

Kane Brown and his wife Katelyn have been given many reasons to celebrate within recent months. The first celebratory moment came in October, which is when they two tied the knot during a ceremony at Mint Springs Farm in Tennessee.

Just a few months later, the “Good as You” singer and his wife had some happy news to share. On April 15, Kane shared an ultrasound image with his followers on social media, revealing that he and Katelyn are expecting their first child!

Just about a month later, while walking the red carpet together at the Billboard Music Awards, Kane and Katelyn revealed they’re expecting a baby girl!

While the news was revealed during their red carpet interview, most people didn’t hear about it until their interview aired on Ellen DeGeneres’ show the following day.

Kane Is So Proud Of Katelyn

As if all of that wasn’t exciting enough, Katelyn recently celebrated a milestone moment in her life.

On Saturday (May 11), Katelyn graduated from Berklee College of Music in Tennessee after years of working toward her degree. In her Instagram post, she wrote about the challenges she faced trying to finish her schoolwork while traveling the world with Kane.

But in the end, it all paid off.

“…finishing my education was the most rewarding thing I have done for myself thus far,” she wrote. “If you are thinking whether or not your going to get your degree or if you can get through the years of college … DO IT !”

In her post, Katelyn also thanked her husband for always supporting her as she worked toward her education. We can tell how proud he is of her just based on the big smile he’s sporting in her graduation day photo!

Kane went all-out to help Katelyn celebrate this major moment in her life, and put together a big surprise for her once they got home. He is already an expert at surprising his wife, as he filled the house with an abundance of roses to celebrate their first Valentine’s Day as a married couple.

Katelyn was shocked beyond belief!

Kane Comes Back With Another Surprise

So when it came time to celebrate Katelyn’s graduation, Kane had to put together a surprise that was somehow even more epic than his Valentine’s one. And we’d say he succeeded!

On social media, Kane shared a video that shows Katelyn’s reaction to a surprise graduation party he planned for her. The first thing Katelyn saw were big metallic balloons spelling out “Congrats Kate,” which were impressive enough.

But then she turned to the side and saw a whole bunch of her loved ones standing there, cheering her on. That’s when she broke down and covered her mouth with her hands before walking away, wiping tears from her eyes.

Based on her reaction, we’d say that Katelyn was quite surprised by the party her husband threw for her! You can watch how the surprise played out by tuning in to the video below!

We gonna celebrate her graduating all damn year I’m so excited for her haha 🎉🎉🔥 pic.twitter.com/Pf141kSMvj