By Miranda Raye on June 6, 2019
Advertisement 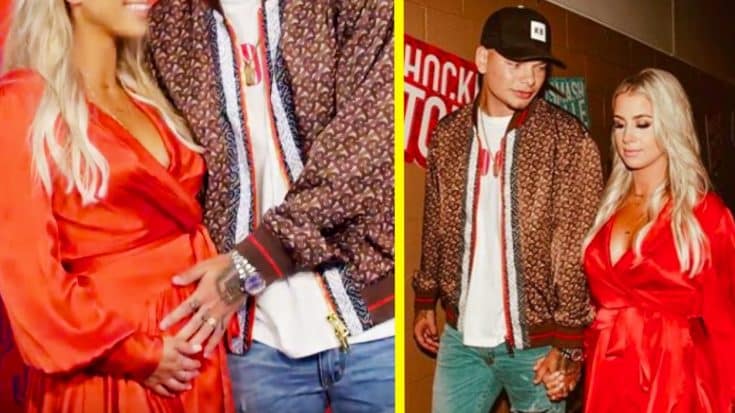 Back In April, Kane Brown and his wife Katelyn shared the happy news they’re expecting their first child. They later revealed they’re having a baby girl, and are excited to welcome her later this year.

The Browns were one of several expecting couples who walked the red carpet at the CMT Music Awards on Wednesday night (June 5).

Brett Young and Brantley Gilbert‘s wives Taylor and Amber are also pregnant (and also having girls!) and they dressed up their baby bumps for the special event.

Since Kane and Katelyn just announced their pregnancy a couple of months ago, Katelyn isn’t as far along as Taylor and Amber. And until recently, we haven’t seen much of Katelyn’s baby bump.

The new college graduate recently shared a photo on Instagram that finally showed her growing belly, and fans went gaga for it, even though you still couldn’t see that much.

But that bump was on full display at the CMT Music Awards, and Katelyn looked gorgeous in a bright red wrap dress. Kane could be seen touching Katelyn’s belly, and photographers captured some precious photos of the pair.

Kane revealed in an interview with CMT’s Cody Alan that he wrote a song for his unborn child. However, he wrote it before they found out the gender, so he actually wrote it as if he was speaking to a son, not a daughter.

He told Cody that he doesn’t know if he’ll ever release that particular song, but says he now needs to write something specifically for his baby girl.

💖@kanebrown is working on a song about his baby 😍CAN'T WAIT!

Kane and Katelyn haven’t revealed when Baby Brown is due. Since they made the announcement in April and people generally wait three months before publicly announcing a pregnancy, we’d guess she’s due sometime in October or November.

That means that we may not get the chance to see the couple walk another red carpet together while Katelyn is still pregnant (the CMA Awards are in November).

So be sure to look through all of the above photos and watch the video below to admire Katelyn’s maternity fashion. She was glowing!