By Miranda Raye on February 3, 2020
Advertisement 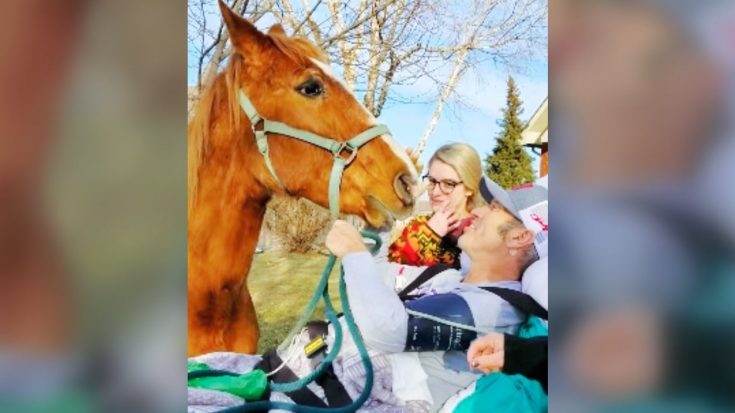 On February 29, 55-year-old Kevin Adkins passed away following a three-year battle with cancer. But he left this world after having his dying wish granted the day prior, all thanks to his friends and daughter, Delaney.

“They’ve been partners for all these years,” Jennifer said. “It could be pouring rain, it could be snowing, it could be hotter than heck. He was always here.”

Cancer didn’t stop Kevin from spending time with Vic. After his diagnosis, Kevin continued to spend hours with his beloved horse.

But eventually, Kevin had to stay in the hospital, and Vic obviously couldn’t come with him. He missed his best friend, and it was his dying wish to get to tell him “goodbye.”

For nearly two decades, the cowboy and horse spent every day together, even during the three years the man fought cancer. https://t.co/DHV9t3bxB9

His daughter, Delaney, helped grant that wish. She arranged for her dad to come home just long enough to see Vic one last time.

Their reunion was caught on camera, and shared by Jennifer. The video shows Kevin being wheeled out of an ambulance on a stretcher, while a woman, presumably Delaney, stood in the yard with Vic.

She then lead Vic over to Kevin, who was overjoyed at the sight of his old friend. Kevin smiled as he reached out to Vic and pet his neck. Cowboy and horse spent a few more precious moments together before they said their final goodbyes.

As we mentioned earlier, Kevin passed away the following day. KCBD reports that Vic will be an honorary pallbearer at his funeral on February 15.

You can watch Kevin and Vic’s final meeting in the video below. It may be wise to grab some tissues first, because the video is an emotional one.

Our hearts and prayers go out to Kevin’s family, friends, and Vic during this sad time. May Kevin rest in peace.