By Miranda Raye on October 31, 2019
Advertisement 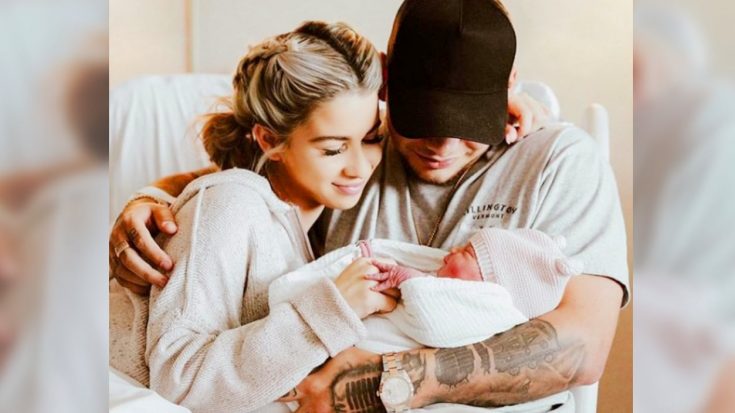 In April, Kane announced that he and Katelyn were expecting their first child by posting a sonogram photo on Instagram. He expressed his excitement about becoming a father in the caption, writing, “IM GONNA BE A DADDY!!!!!!!!!!!!!!!!!!!!!!!”

Eventually, the Browns shared they were expecting a baby girl. They kept her name under wraps until their baby shower, which took place in August.

The couple’s close friends Jason and Brittany Aldean hosted the shower, which was decorated with a wealth of pink and purple balloons. One of the balloon’s revealed baby Brown’s name…Kingsley.

Officially announcing our baby’s name! KINGSLEY can’t wait for u to be here!!! Thank you @jasonaldean and @brittanyaldean for throwing us this awesome baby shower 💯 love you guys!!!

During an Instagram Q&A, Katelyn said they chose “Kingsley” as their daughter’s name because she liked “Kingston” as a name for a boy. She explained they wanted something feminine, but “strong” for their daughter, and Kingsley was the perfect fit.

“I still wanted to use something similar and thought [Kingsley] was beautiful,” she said.

During that same Q&A, Katelyn also said that Kingsley’s middle name would be “Rose.” That happens to be Katelyn’s middle name as well, and she was given the moniker in honor of her great-grandmother.

Kingsley’s nursery is fitting for her name, since it is quite regal. Kane unveiled the finished room in a video he posted to Instagram just nine days before his baby girl made her debut.

We have had some super rough days lately.. but this puts a smile on my face ❤️ Kings rooms finished 🔥

Kingsley Rose Brown was born on October 29, Kane’s rep confirmed with People. Kane and Katelyn waited until the following day (October 30) to announce her arrival, with Kane being the first to share a post.

“KB3…welcome to the family Kingsley Rose Brown!!!!” Kane wrote on Instagram alongside a photo of him and Katelyn holding their newborn daughter. Kane planted a kiss on Katelyn’s forehead while she looked at baby Kingsley and smiled.

A few hours later, Katelyn shared a new photo of Kingsley on her own Instagram page. The photo was taken in the same place as the one Kane shared.

This photo shows both Kane and Katelyn admiring their baby girl as they snuggled close to one another. Kingsley reached out her hand to rest it on top of Katelyn’s, resulting in an adorable snapshot.

“obsessed with my little family…Kingsley Rose we are absolutely in love with you…” Katelyn wrote in the caption to her photo.

obsessed with my little family😍 Kingsley Rose we are absolutely in love with you❤️ 10.29.19

Baby Kingsley is so precious! We can’t wait to see more photos of her in the future.

Congratulations to Kane and Katelyn on their new addition! They have such a beautiful little family.