By Manly Bryant on February 8, 2019
Advertisement 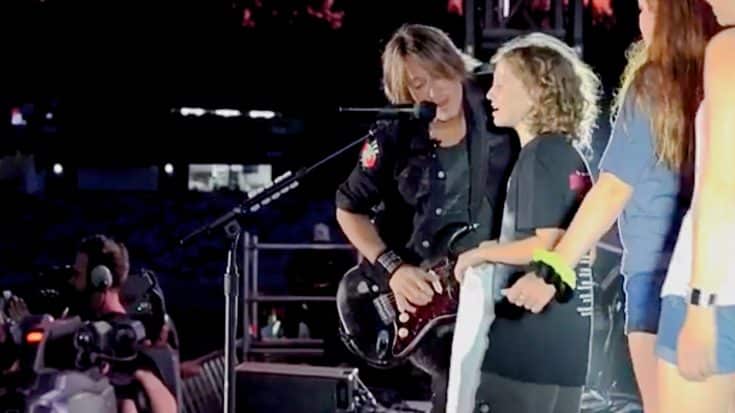 During a stop on his Grafitti U tour in his homeland of Australia in early 2019, he shared a beautiful moment with a young girl and her mom and sister on stage in front of thousands…

In the middle of his Canberra, Australia show, Keith Urban spotted a young girl holding a sign and after reading what it said – decided to bring the young Aussie on stage!

last night it was all @KeithUrban in Canberra. What a showman. I loved it. @juliamichaels was a great opening act and joined Keith for a couple of songs.

A great night out. Well worth the 8 hours in the car. pic.twitter.com/BOxCaVafV7

The singer, who performed at the show on January 28th, 2019, was thrilled to be in a warmer climate than Nashville (because it was summer in Australia) and clearly was having the time of his life on stage – especially after young Hazza joined him!

Hazza is short for Harry/Harriet, as she explained to him, before revealing that she’d traveled more than an hour to get there with her mom and sister. Once he realized there was family in the audience, too, he brought them all on stage!

Once on stage with her family, Hazza (who was super nervous and even cried a few tears of happiness) explained that she loves to sing and is even competing in talent show soon!

Urban, who is such a swell guy, did his best to make her feel less nervous and cracked a few jokes about how he gets nervous and forgets stuff too.

Then, after suggesting they sing “Uptown Funk” together – somehow they settled on a duet of his beautiful song “Parallel Line” and it was a moment Hazza will never forget!

Urban posted their special moment together on his social media for all the world to see and looked back on it with a big smile.

Check out Keith Urban and young Hazza’s duet of “Parallel Line” below and let us know what you think in the comments!

#TBT to our phenomenal singalong in Canberra on the #GraffitiUWorldTour Australia!