By Jennifer Pernicano on September 26, 2018
Advertisement 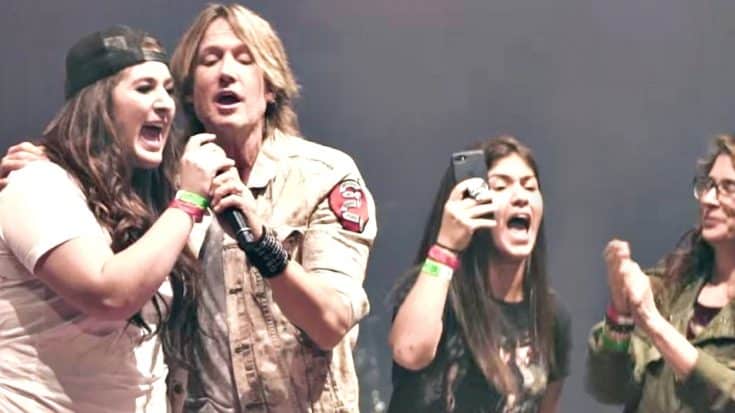 Keith Urban is known for his connection he makes with his fans. But for this one girl, he went above and beyond to make not just her day – but her entire family’s!

22-year-old Michela Sheedy’s family has been attending Keith Urban concerts in Alberta, Canada for eight years now. But never in their wildest dreams did they expect to get up on stage with the superstar.

Just goes to show, your wildest dreams can come true ?♥️ Photo credit goes to my pal @keithurban P.S. Thanks for letting me sing with you ?#SHOOK #GraffitiUWorldTour

During his Graffiti U tour, the Sheedys were excited to hear he would be playing in their town once again at the Scotiabank Saddledome on September 23, 2018. They got ready for the night, decked out in denim and boots and one special item that would later catch Urban’s attention.

The Sheedy sisters brought two home-made signs with them to the show. Michela’s light-heartedly joked, “I will trade my sister for a chance to sing with Keith Urban.” Luckily, her sister seemed to be in on the joke with a sign that said, “Take me!”

The girls were just kidding around, but when Urban saw the silly signs, he called Michela out and brought her on stage.

After finding out her family was there with her, he invited the whole gang up to support her as she sang his famous Miranda Lambert duet, “We Were Us.”

Urban even sang along with her – their faces almost touching as they shared the microphone!

Sheedy later told CTV Calgary, “I had a moment to myself and said ‘OK, keep it together. Remember your words… Me and him are singing into the same microphone and it was crazy. His face was practically on my face.”

The young girl wowed the audience and Urban with her powerhouse voice. But they didn’t know that Sheedy is actually an aspiring artist herself.

While she admits she isn’t expecting instant stardom after her time on stage with Urban, she is thankful for the opportunity and is “prepared to just keep on working hard and writing good music and we’ll see where it goes from there.”

We have a feeling we will be seeing a lot more from this girl in the future. Check out her full performance with Urban below and let us know what you think!