By Miranda Raye on September 11, 2018
Advertisement 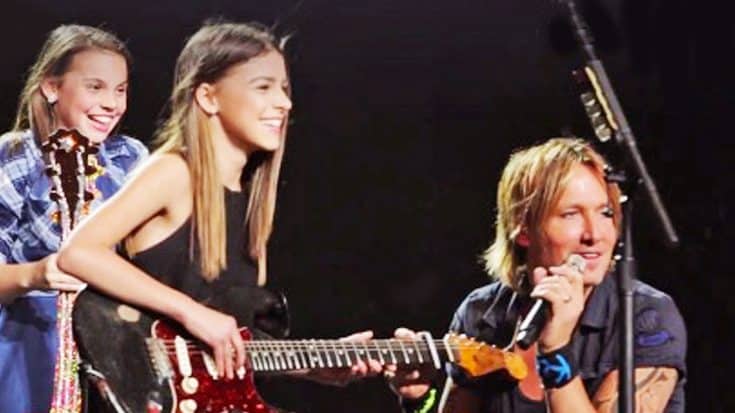 Keith Always Shows The Love To His Fans

One young Keith Urban fan got the chance to live out her greatest dream in front of nearly 20,000 people.

While performing at a concert in Edmonton, Canada, Urban couldn’t help but notice some sparkly guitar-shaped signs being held up in the crowd. He decided to invite the sign holders on stage, and they turned out to be two young sisters.

As if having the chance to step up on stage with Urban wasn’t incredible enough, the sisters’ night was about to get even better.

Keith Was Amazed By This Girl’s Talent

When Urban handed the microphone to 14-year-old Hailey Benedict and asked her what she wanted to do when she got older, her response made him cheer. Benedict revealed that she’s always wanted to be a singer and songwriter.

Urban addressed the girls’ mother, telling her that he absolutely approved of that choice. Then he asked Benedict if she writes her own songs now, and she said yes. He then asked her if she knew how to play guitar, and she also said yes to that.

Before Benedict had any time to process what was happening, Urban asked for a guitar to be brought out to her. Interrupting his own show, Urban helped Benedict get set up and gave her a chance in the spotlight.

With the crowd cheering her on, Benedict sang her original song, “Clean Slate,” and blew everyone away. She seemed like a natural up there on stage, as she looked out at the audience with the biggest smile on her face.

Keith Does This All The Time

Once Benedict finished singing, Urban rushed over to her and wrapped her up in a big hug. He was clearly impressed by her performance, because he shared a video of it on his Facebook and YouTube and thanked her for singing.

Anyone who has attended one of Urban’s shows before knows that such an occurrence isn’t unusual. Urban loves to showcase the talents of his fans, just as he did at another concert in 2016.

This time, he welcomed a fan up from the crowd to play guitar for him on “Good Thing,” and he wowed everyone with his skills. Check out that video below.

Kudos to Urban for always giving his talented fans a chance to shine!