Keith Urban Names P!nk As Duet Partner On New Song, “One Too Many” 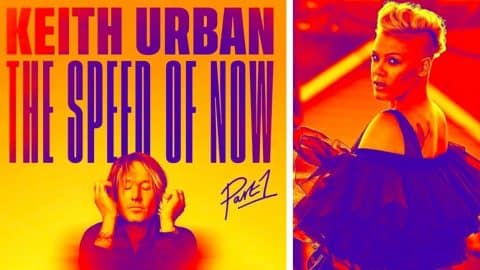 On August 5, Keith Urban announced his plans to release a new album. He revealed the album’s title, cover art, tracklist, and release date via a post to his social media profiles.

The album, titled The Speed of Now Part 1, will drop on September 18. No word yet on when Part 2 of the album will be released.

The Speed of Now Part 1 contains 16 tracks, including the already-released “Change Your Mind,” “God Whispered Your Name,” “Polaroid,” and “We Were” with Eric Church.

Two other collaborations appear on the tracklist, though Urban kept the names of his collaborators secret in his initial announcement.

This is THE SPEED OF NOW.

Finally, Urban named those other collaborators on Monday (August 17). He shared that BRELAND and Nile Rodgers will join him on the album’s first track, titled “Out the Cage.”

As for track #2, which is named “One Too Many,” Urban said his duet partner is none other than P!nk.

P!nk may be known as a pop star, but she’s quite familiar with the country music world by now.

In 2016, P!nk joined Kenny Chesney on his song “Setting the World on Fire.” It topped both the Hot Country Songs and Country Airplay charts and went on to be nominated for the Best Country Duo/Group Performance award at the Grammys.

Then in 2019, P!nk had Chris Stapleton join her on her song “Love Me Anyway,” which was included on her album Hurts 2B Human. The duo delivered a performance of the song at the CMA Awards later that year. Relive that performance by checking out the video below.

P!nk has proven to be a good collaborator with country stars, so we can’t wait to hear her sing “One Too Many” with Urban.

P!nk and Chris Stapleton – Love me anyway at CMA Awards