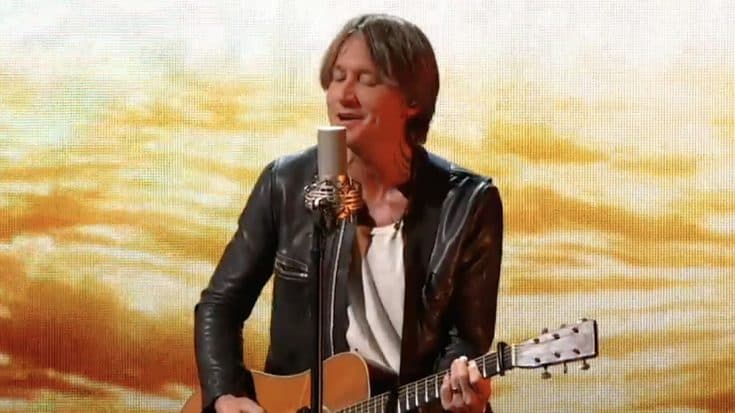 Keith Urban took to the stage at Nashville’s Bridgestone Arena Wednesday night during the 53rd CMA Awards show to perform an acoustic version of his latest single, “We Were.”

At the time of the song’s radio release in May, Urban revealed that he cut “We Were” without knowing that it was co-written by his buddy Eric Church.

“I found out and I called Eric, and I was like, ‘Dude, I just cut this song.’ He was thrilled,” Urban recalled. “I said, ‘I had no idea that you were a writer on it.’ He said, ‘Well that’s even better, because it means you really loved the song.’ I do. I really love the song.”

After Urban’s solo release of “We Were,” he invited Eric Church to record a duet version. Church’s voice didn’t bring a lot of changes to the song, though. He simply takes over the lead on the second verse and chorus, then is joined by Urban for the remainder of the song. The two previously collaborated for “Raise ‘Em Up,” a Number One airplay hit in 2015.

“We Were” is from a yet-to-be-released album that the singer hints might have a few surprises.

“There’s a couple of collaborations on there,” Urban revealed. “It’s hard to know what ends up making it to an album, versus what might be used in some other way. So I’m just anxious to get new music out, right? You know that feeling.”

The reigning Entertainer of the Year is also nominated for Male Vocalist of the Year and is hoping for a repeat win in the night’s biggest category. He is up against Garth Brooks, Eric Church, Chris Stapleton, and his “The Fighter” duet partner Carrie Underwood.

“I feel that it’s the strongest its ever been,” Urban said of the Entertainer of the Year category nominees, but admits that he can’t see himself winning the title two years in a row.

“[That’s] one of those classic things that happens to other people who win it multiple times, right?” Urban said. “I couldn’t picture it last year either, so don’t ask me. But, I will say to be nominated again was pretty surreal.”

Watch Keith Urban’s CMA Awards show performance of “We Were” in the video below.

That moment when "we were" OBSESSED with Keith Urban's #CMAawards performance!! ?