Keith Urban Says He Owns ‘Maybe A Hundred Or So’ Guitars

By Miranda Raye on May 4, 2018
Advertisement 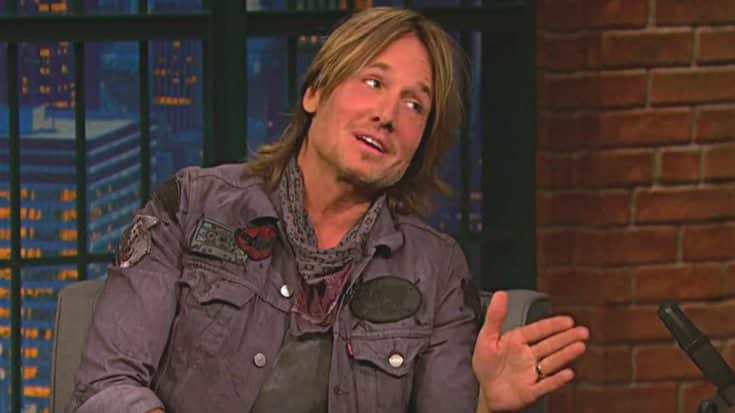 It basically goes without saying that Keith Urban is one of the best guitar players that country music has ever seen. After fans leave his shows, you hear as many compliments about his guitar playing as you do about his singing.

Urban’s skills as a guitarist are so well-known, that other artists have approached him to lend a helping hand on their songs. Just take Tim McGraw and Taylor Swift‘s “Highway Don’t Care” as an example. Urban played guitar on that song, and it reached the sixth spot on the Hot Country Songs chart.

Now that Urban has a new album out, he’s making all of the talk show rounds to chat about it. Of course, the new album features plenty of stellar guitar work from Urban, prompting one show host to speak to him specifically about guitars.

How Many Guitars Does Urban Really Own?

During an appearance on Late Night With Seth Meyers, Urban was asked by Meyers exactly how many guitars he owns. After all, it always seems like Urban is playing a different guitar every time we see him on stage.

Do you have any guesses how many guitars Urban has to his name? Whatever your guess may be, we can pretty much guarantee that it’s too low.

While he doesn’t know the exact number, Urban estimates that he has “maybe a hundred or so” guitars. That’s a lot more than we ever would have guessed!

To Urban, it seemed like no big deal to say that he owned that many guitars. But once Meyer pointed out that it sounded like a lot, Urban admitted “it does sound excessive.”

Urban Bids For The Best Guitars

As for where he gets all of those guitars, they come from a surprising source. Bet you’d never guess this one either!

“I’m not really a collector,” Urban started. “You need a certain guitar for something, and so you find one. I find real good sales on eBay.”

When Meyers asked Urban if anyone else ever knows that he’s the one bidding against them, he laughed and said “no.” Just think…if you’ve ever been bidding on a guitar, Urban may have been in a bidding war with you!

You can listen to Urban and Meyers chat more about guitars by checking out their interview below. We don’t know about y’all, but now we’re curious to know where Urban keeps all of those guitars!