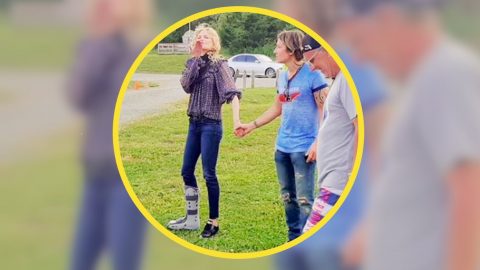 Those who simply saw the picture Nicole Kidman shared following Keith Urban‘s drive-in concert at the Stardust Drive-In Theatre never would have known she was hobbling around with a cast on her foot.

Kidman didn’t draw any attention to her injury, and even cropped her foot out of the picture. Instead, her focus was on her husband’s concert and the “incredible” frontline workers he entertained during the show.

A press release states Urban sang for 200 “doctors, nurses, emergency medical technicians and staff from Vanderbilt Health,” that night (May 14).

Even though Kidman didn’t share a photo of herself in her cast, one was posted by the theatre. The picture quickly circulated online as fans expressed concern for the Big Little Lies actress and wondered what happened to her foot.

A day later, Urban addressed his wife’s injury during an interview with ET.

“She broke her ankle, but she is a trooper,” he said. “There she was last night among all of the folks, hobbling around on her boot with her mask on.”

You can see the photo of Kidman wearing her cast by flipping through the below slideshow. It’s the seventh image in the set.

Although Urban’s conversation with ET revealed why Kidman was wearing a cast, he didn’t explain how she ended up in that predicament. He provided further clarification in an interview with the Australian show The Project:

“About five weeks ago, she was running around the neighborhood as she does and just didn’t see a pothole and rolled her ankle and got a small break in her ankle,” he said.

“She’s been relegated to the boot for the last handful of weeks and is still getting through it,” he said. “But her spirits have been amazing, I gotta say. She’s been handling it way better than I would’ve.”

You can hear Urban’s full interview with The Project by tuning in to the clip below.

We’ll be praying for Kidman’s quick and complete recovery. So far, it sounds like she’s doing well considering the circumstances!