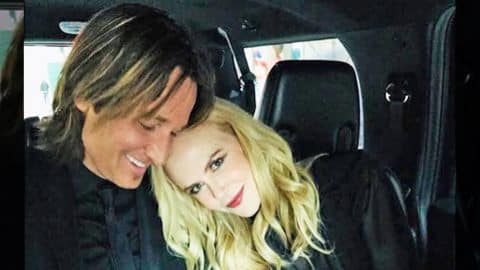 In August 2018, Keith Urban and Carrie Underwood were able to finally celebrate their duet “The Fighter” hitting number one, an entire year after they actually completed the feat. Taking over musician Gavin DeGraw’s Nashville bar The Back Corner, Urban and Underwood treated partygoers to a performance of their massive hit.

Not only did he perform the song, he also revealed some never before heard information about the song, which he wrote with songwriter busbee.

“I was listening to Charlie Puth and Meghan Trainor singing ‘Let’s Marvin Gaye and get it on…’ and I was like, ‘Man…I need to write a duet’,” he revealed, according to KWBE. “The very next thing I thought about was ‘Paradise by the Dashboard Light’ by Meat Loaf…because they talk back and forth to each other… Literally it was a conversation…I thought it’d be great to write a call and response thing between a guy and a girl.”

After writing “The Fighter,” he knew he had to get Underwood to sing it with him.

He also opened up about the relatively easy songwriting process, and it’s all thanks to his wife of 12 years, actress Nicole Kidman, who he calls “Nic.”

Remembering 12 years ago today at a church in Manly, Australia. Still feels like it was yesterday. I’m a lucky woman ❤️ Happy Anniversary Baby.

“It was such an easy song to write because it was born of real conversations Nic and I had before we got married,” he said in an interview at the number one party. “It’s interesting because a lot of the song feels like vows. They really are, ‘This is what I promise I’ll do, and I’ll take care of you and keep the world away.’ It was very easy to write from that perspective.”

When you really listen to the lyrics, you can understand why Urban feels like these are vows to his wife. He is promising to always be there for her and when she has doubts, he’ll prove his love to her over and over again.

Watch Urban and Kidman perform the cutest carpool karaoke to “The Fighter” in the video below.