By Miranda Raye on April 9, 2019
Advertisement 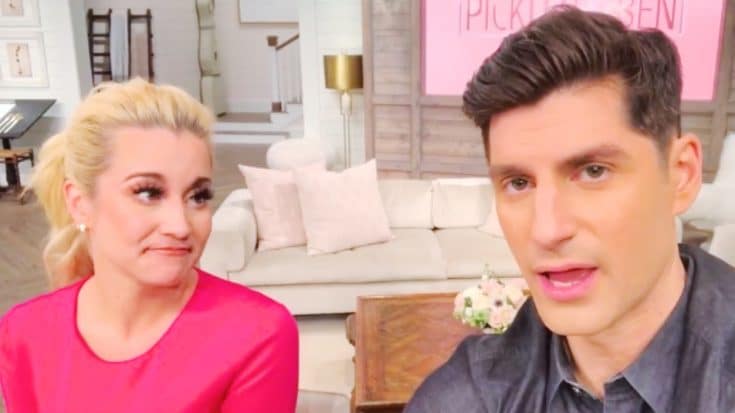 On March 28, The Tennessean revealed that the Nashville-based daytime talk show Pickler & Ben would be ending after the conclusion of its second season in September. Hosted by country singer Kellie Pickler and media personality Ben Aaron, the show featured charming segments on music, cooking, decorating, and more.

It’s DAY 2 of our WATCH & WIN FOODIE SWEEPSTAKES! Today’s question: What does Maggie Louise (@maggielouiseconfections) make her edible lipsticks out of? Leave the answer in the comments below for a chance to win a 10-piece @anolon cookware set (RTV $499) and a copy of @mollyyeh’s cookbook “Molly on the Range.” Check out our Facebook page to learn how to enter again there and stay tuned for tomorrow’s question! Contest ends on 2/27/19 at 8:59AM CST. Official rules on picklerandben.com.

Co-produced by Faith Hill, Pickler & Ben also focused a great deal on the city in which it was filmed. Country stars frequently stopped by as guests, and Pickler and Aaron went out into the world to explore the best attractions Nashville has to offer.

Viewers loved the show’s wholesome nature, and it quickly developed a devoted following as a result. One fan even proposed to his girlfriend during a taping!

You can imagine how devastated viewers were when they learned that the show was being canceled. The cancellation news was made all the more shocking since it came just days after the show was nominated for two Daytime Emmy Awards.

So why is it that the show is being nixed when it’s clearly beloved by viewers and has proven to be successful? The Tennessean article cites The E.W. Scripps Company, which oversees Pickler & Ben, as saying the show doesn’t seem to promise much “long-term profitability.”

For nearly two weeks, Pickler and Aaron remained silent about the show’s cancellation, even though fans started flooding their social media posts with questions about it. Finally, the two felt it was time to personally address their devoted viewers and explain why their show won’t be around much longer.

Aaron described the circumstances that led to the show’s cancelation, shedding a bit more light on why it won’t be able to continue:

“In the business of television, if you don’t air in LA, New York, all of these big cities, you don’t make a lot of money. You don’t make enough money. And we were on track to do that, and then new shows came out and prevented us from doing that.“

The “new shows” Aaron is likely referring to include talk shows hosted by Kelly Clarkson, Tamron Hall, and more. To put it simply, with the influx of new talk shows flooding the airwaves, Pickler & Ben had its planned trajectory cut off and can’t afford to be produced in Nashville any longer.

This is our last week of taping in 2018! Request your free studio audience tickets at picklerandben.com/tickets.?

Sadly, Pickler and Aaron admitted that it would take “a miracle” to save the show, and by a miracle, they mean a whole lot of money…$15 million to be exact.

With tears in their eyes, Pickler and Aaron thanked their viewers for being so loyal, with Pickler saying it was a “blessing” to be able to host the show. She’s promising to keep her fingers crossed in the hopes that the show will be saved, and we’re sure a lot of others are doing the same!

You can watch Pickler and Aaron’s full video addressing their talk show’s cancellation below. We sure hate to see it go!

Kellie Pickler and Ben Aaron wanted you to hear this from them.?

Kellie Pickler and Ben Aaron wanted you to hear this from them.?For all the latest, be sure and subscribe to our e-mail newsletter: http://bit.ly/2Tmt1q6