By Miranda Raye on October 23, 2019
Advertisement 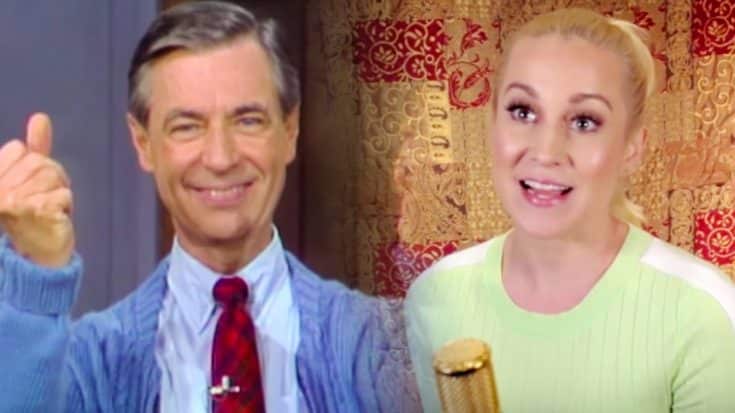 Throughout his 74 years on this Earth, Fred Rogers wrote over 200 songs. Many of those songs were used on his beloved television show, Mister Rogers’ Neighborhood, which ran from 1968-2001.

One of those songs was titled “It’s Such a Good Feeling.”

Now, that song has been reimagined by a country music sweetheart for a new album celebrating Mister Rogers’ musical legacy.

The album, titled Thank You, Mister Rogers: Music & Memories, is set for release on Friday (October 25). Its release marks the kickoff of “Thank You Mister Rogers Month,” which will end with the debut of the new Mister Rogers biopic, A Beautiful Day in the Neighborhood, in November.

Tell your neighbors. A new episode of our podcast releases tomorrow and I’m glad to say it features a song from the new album, #Thankyoumisterrogers performed by @TheMickyDolenz1 . Welcome To The Neighborhood: A Mister Rogers Tribute Podcast. FredRogersPodcast.com #thankyoumisterrogers #mickydolenz

Stars such as Lee Greenwood, Rita Wilson, and Billy Davis Jr. contributed to Thank You, Mister Rogers: Music and Memories. We also know that Kellie Pickler got the chance to cover “It’s Such a Good Feeling” for the album.

In an interview with Billboard, Pickler explained how meaningful it was that she got to sing one of Mister Rogers’ songs for the record. She said she grew up watching his show as a child:

“Doing this immediately took me back to my childhood,” Pickler said. “My grandmother was very particular about what I was allowed to watch on TV, as grandmas should be. When I was with her she only wanted good things to be in front of me, and ‘Mister Rogers’ was that safe place. It was for so many people, I think, a safe place.”

When she was asked to be part of the Music and Memories project, Pickler said she felt the pressure to “make Mister Rogers proud.”

“Thank You Mister Rogers: Music and Memories” will be released this Friday featuring @kelliepickler & more https://t.co/FQYHXWBWHM

“I wanted this to really live up to his standard,” she said about her recording of “It’s Such a Good Feeling.”

A sneak peek clip of Pickler’s performance was posted on the official Thank You, Mister Rogers: Music and Memories YouTube channel on October 18. You can catch that clip below to get an idea of what Pickler sounds like while singing “It’s Such a Good Feeling.”

Mister Rogers’ music touched so many hearts. Now, his legacy will live on through these new recordings thanks to stars like Pickler.