By Jennifer Pernicano on December 1, 2022
Advertisement 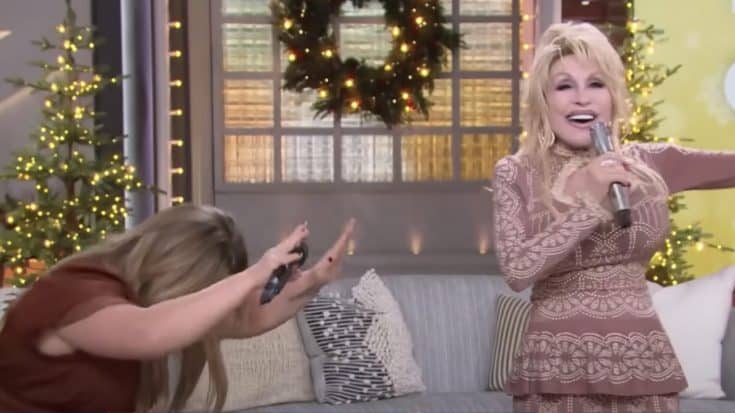 Kelly Clarkson has always made it known that she is a huge Dolly Parton fan. It seems, the feeling is mutual. Clarkson was on hand at the ACM Awards last year to pay tribute to Parton by singing “I Will Always Love You.”

Parton herself called Clarkson’s cover “one of the best ever” during an appearance on the American Idol champion’s daytime talk show.

Parton thinks so highly of Clarkson that she asked the talk show host to join her in a new rendition of her iconic song “9 to 5” for the upcoming documentary Still Working 9 to 5, which will be about the movie and its impact over the years.

On August 26, Clarkson announced the duet on social media, writing, “I’m so excited to finally announce the new version of “9 to 5″ I recorded with the legendary Dolly Parton is coming out on September 9th!!”

This isn’t the first time Clarkson recorded or performed “9 to 5” so fans were pretty excited for the upcoming version.

They released the duet on September 9 and it is wildly different than the original, or Clarkson’s previous cover. This new version is slowed down and sounds more like a ballad than the upbeat song we’ve come to know and love.

“Nobody sings like Kelly Clarkson. She makes any song come alive,” Parton said in a press release, according to PEOPLE. “I love her voice on ‘9 to 5,’ and I am so proud I got to sing with her on it. I’m equally as proud of the wonderful arrangement and production by Shane McAnally.”

Clarkson celebrated singing with the iconic singer on her Instagram by saying, “It was such an honor to join Dolly on this record and I am so happy with how it turned out. I hope y’all love it too.”

In a press release, Clarkson admits that she realizes how different the new song is, but says, “I hope y’all like what we did, but even if you don’t, remember I got to sing a duet with the magical Dolly Parton, and now have bragging rights til the end of time!”

On an episode of The Kelly Clarkson Show, Dolly Parton is scheduled as a guest – likely to promote the fact that she a goddaughter Miley Cyrus are co-hosting NBC’s New Year’s Eve special. Since Parton will be on the show, Clarkson asked if she’d take part in the Kellyoke segment for that day. They decided to mash up their new, slowed down version with the original and it sounds like it will be amazing!

Luckily, Clarkson’s show released the rehearsal footage, proving just how incredible both her and Parton’s voices are. At one point, they were singing a cappella and we got chills! Clarkson felt the same way. Parton sang a run, and Clarkson freaked out so much that she ran around the couch!

In true Dolly Parton fashion, the legend told Clarkson, “Get your ass over here.”

The actual performance was aired on Thursday (Dec. 1) and it was incredible. Clarkson started off the song slow, which was what their reimagined version sounded like, but once Dolly showed up, the energy was high and it sounded like the original!

After the performance, Clarkson bowed down to Parton – and rightfully so!

Take a look at the performance below.