Kelly Clarkson Brings Out Reba For “Because Of You,” “Fancy,” & More During 2019 Show

By Jennifer Pernicano on April 1, 2019
Advertisement 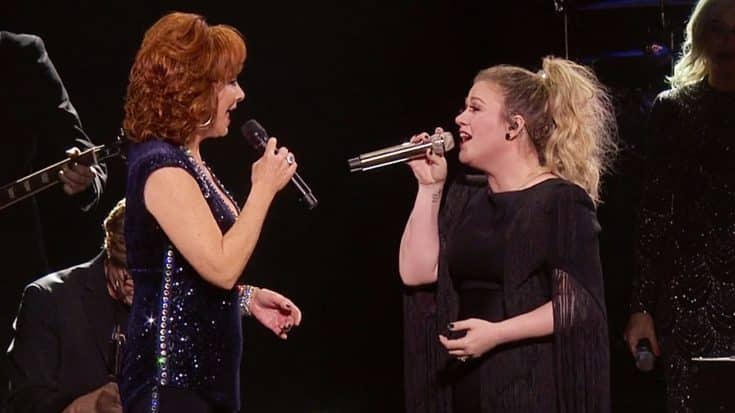 Things got real “Fancy” at Kelly Clarkson‘s Nashville 2019 show when she brought out a country music legend for one hell of a performance.

Kelly sold out venues all across the states for her Meaning Of Life Tour. With powerhouse openers and a fierce setlist, it’s no wonder why fans are leaving the show absolutely speechless. But one Nashville crowd got the show a lifetime when Kelly invited her “hero” to the stage for a medley you probably won’t ever be able to get over.

One special feature of Kelly’s tour is her Minute + a Glass of Wine segment that she did mid-show. The singer grabbed a tall glass of vino and kicks off her shoes to give fans the ultimate experience. Since day one, Kelly has sung a series of hit songs from artists of all genres including Blake Shelton, Ariana Grande, and Miranda Lambert. But this time around, Kelly switched it up a bit.

These Minute + A Glass of Wine's are SO FUN! Tulsa — see you tonight! Don't forget to tune in live on Facebook every night on tour! ? – Team KC

Setting the crowd up for the biggest surprise of the tour, Kelly began boasting about her special guest without mentioning Reba‘s name. Just a few beats into the song Kelly ushers Reba to come out and the crowd went wild.

Beginning with Kelly’s hit ballad “Because Of You” the two came together in harmony, Reba taking a majority of the lead. Switching up gears, the pair then starts singing Reba’s jazzy hit, “Can’t Even Get The Blues.” Reba, who is dazzling in a bejeweled blue getup, is clearly having the time of her life on stage.

Following, the pair start by trading off verses for Reba’s 90s song, “Fancy.” Kelly’s raspy vocals paired with Reba’s twang was the perfect touch to this already powerful tune.

Just when fans thought it couldn’t get any better, Reba jumped into “Is There Life Out There” followed by her brand-new song, “Freedom” off her newest album! Reba took over the stage as Kelly stood back and watched in admiration.

Following the powerhouse performance, Kelly fell to the floor and began bowing down to the country music icon!

It’s not every day you get to see a performance this raw and humbling. Now, who else thinks these two need another song together?!

It may only be a few months into the year but we dare 2019 to have a better surprise medley than this one! We’ll be listening for years to come.